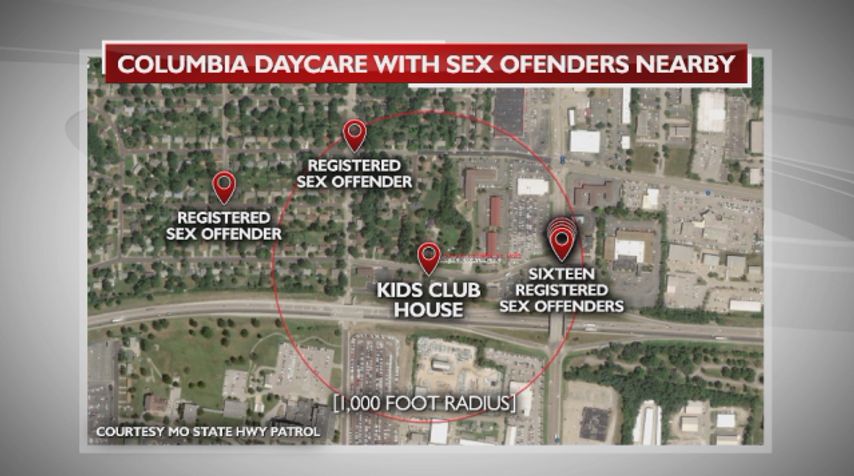 COLUMBIA - Target 8 discovered more than 16 sex offenders living at Columbia's Welcome Inn, which an online map shows could be within 1,000 feet of an at-home day care.

The Boone County Sheriff's Department disputes the map because the motel is set back from the road, making the distance more than 1,000 feet. An MSHP spokesperson defers to the sheriff's department. He also clarified the map is a service to the public and an approximation. A CPD officer told KOMU 8 the property line starts at a private drive. Target 8 measured the distance from the day care to the property line and it was 872 feet.

According to Missouri law, “Certain sexual offenders may not reside within 1,000 feet of any public or private school up to the 12th grade or childcare facility which is in existence at the time of the offender establishing his or her residency.”

A neighbor who lives up the street from Kids Club House said the numbers came as a shock.

“I was just flabbergasted when you said 16 or 17 just in that one hotel,” Kimmy Argotsinger said.

The sex offender registry is a public resource on the Missouri State Highway Patrol's website. Anyone can put an address or name into the database and find sex offenders living or working within their chosen radius.

The Boone County Sheriff's Office website said its list in available in electronic publically viewable form through the use of the highway patrol's Sex Offender Registry.

Lt. Collin Stosberg, with the patrol's Public Information & Education Division, said the Boone County Sheriff would be in charge of using the information provided.

“The registering official of the county or city not within a county is responsible for registering sex offenders, verifying the information contained in their statements and determining if an offender is non-compliant,” he said in an email.

KOMU 8 News reached out to the Boone County Sheriff’s Department on April 15. Deputy Tony Perkins said the department didn't want to look at the data or comment on the matter.

The Target 8 team called the deputy again on April 22. He said he did not believe the addresses provided were within 1,000 feet of each other and wanted to look at them again.

KOMU 8 reached back out to the highway patrol for confirmation whether the map is accurate. Stosberg said the map is approximate and referred KOMU 8 to the map's disclaimer.

KOMU 8 showed neighbors photos of the 17 offenders registered near the daycare. Three of them recognized the same man, who they said, they have seen in the area.

Perkins said right now, the sheriff's department checks addresses in the system to make sure sexual offenders are compliant within the law when they  register for the first time.

Neighbors said they are worried the department isn't doing its job.

"I realize that the police are very, very busy, but it’s like with certain [things], you have to just prioritize," Argotsinger said. "This kind of thing needs someone or a couple of people that are just on it, you know, making sure they're registered, they're where they're supposed to be, doing what they say."

Amanda Kryger, who lives near Kids Club House, said that's a no brainer.

Kids Club House is not the only daycare center within 1,000 feet of where sex offenders live, work or go to school in Columbia. This interactive map offers details on the location of offenders near 18 daycare centers.

The owner of Kids Club House said she cannot comment on the situation. She said, when she has spoken up,, she has received backlash, such as people breaking into her home.

The daycare has been open for nearly a decade. Argotsinger said she feels for the owner, the children and the parents.

“That woman started her daycare, and I can imagine when the parents, if they haven’t already looked into it, they’re going to be like ‘do we pull our child?’” she said. “She’ll be doing everything she can to keep those children safe, but it’s just like, it’s a numbers game again.”

KOMU 8 News reached out to the Welcome Inn for comment and an employee said the hotel is a private property and cannot give out any information about who stays there. The owners of the hotel did not respond to multiple emails.

When the Target 8 team went to the property, a manager threatened a lawsuit and called Columbia police.

“That motel just is not, it’s just not a good place.” Kryger said.