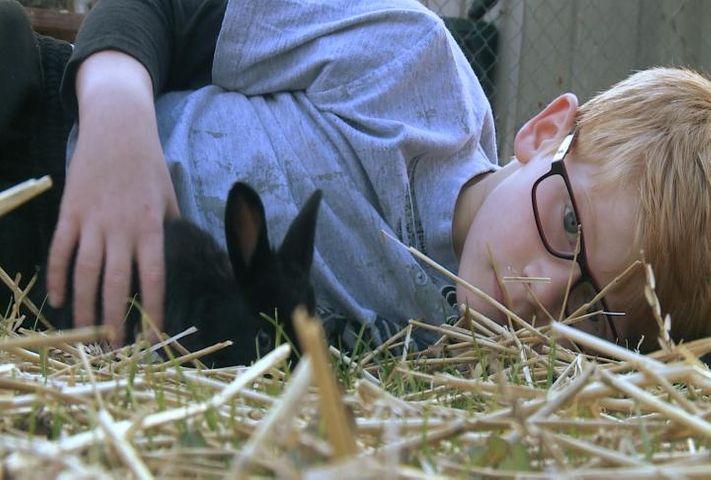 COLUMBIA - KOMU 8 News met Kaleb Sweeney in November 2014 for a Target 8 report focusing on ADHD numbers and a new therapy. In January 2015, KOMU 8 News got a call from Kaleb's mother, Emily Sweeney, explaining what they thought was ADHD now had a completely different diagnosis.

"I just had this mommy gut feeling," Sweeney said. "I slept on it, and I took him to urgent care, and they found a cyst on on his brain."

For years, Emily Sweeney watched her son struggle with headaches, lack of sleep and impulsivity. Doctors recommended medication and a unique type of therapy for ADHD and other disorders called nuerofeedback. Emily believed the neurofeedback was helping but said the medication only made him worse.

"We would see the good effects of it, he was able to focus in school," Sweeney said. "But it would wear off, I would go to pick him up and he had been playing in the gym and he had red face with white stripes, you could literally see the white stripes down his face."

The effects of medication weren't just apparent physically; she noticed her son was uncomfortable in his own skin.

"He was angry and agitated and so one day I had to pull over the car because he wanted to come out of the car, and he was telling me his head hurt so bad that he just couldn't take it anymore," Sweeney said.

After doctors found the cyst on Kaleb's brain, Emily and her son were referred to Dr. Alex Fay, a fifth year neurology resident at St. Louis Children's Hospital.

"After taking a look at his MRI with his parents, it looked like a benign variance," Dr. Fay said. "In terms of what we saw, his behavior was really their biggest concern, and they're actually scared for their kids in the home because of how upset he was getting."

Dr. Fay created a plan to make a few changes in Kaleb including prescribing a new medication that helps with impulsivity and sleep.

"I thought we could treat two symptoms at once," Dr. Fay said. "The fact that he had already tried two medicines for ADHD, and they hadn't helped was a little bit unusual as well."

Dr. Fay also recommended a behavioral therapist to work with Kaleb, and Emily said this has been the biggest contribution to the change she sees with Kaleb.

Dana Woods, a licensed counselor, works with not only Kaleb but his family as well.

"If we want to see him change, we have to change too," Sweeney said.

Woods said she saw improvement with Kaleb within six weeks of working with him; however, she said it's been a journey as Kaleb was not always her biggest fan.

"We just went back to ground zero and re-established boundaries," Woods said. "We pushed a lot of buttons with Kaleb and tried to teach him that it's okay to have those feelings and worked with the parents a lot to make sure they saw the behaviors that they wanted to see."

Dr. Fay said diagnosing ADHD, autism, ADD and other disorders can be challenging as their behaviors tend to be very similar.

"ADHD is an umbrella term that we use to cover a set of symptoms and we have a set of medications to treat those symptoms," Dr. Fay said. "We often use a similar approach whether it's ADHD or autism with attention problems to the approach his other doctors tried in trying the stimulants was reasonable but when the first steps don't work you have to consider another alternative and other diagnosis."

Kaleb also changed schools to work with an individualized education plan or IEP at school, and that has helped his social cues when interacting with peers and teachers.

"At home we've made some progress because he's made a friend down the street," Sweeney said. "He's becoming overall happier, I see him happy. I pick him up for school, and he won the prize box that day, and he's thriving today, where as I saw him struggling just a few months ago, just not happy with school or his peers. It was heartbreaking."

Emily said she can relate to other parents who don't know how to help their child, and it can be overwhelming.

"I would say follow your instinct, follow your gut, educate yourself, and don't take no for an answer and find out what your insurance benefits provide," Sweeney said. "There's a lot of information I realized is provided for Kaleb and other therapies, transportation, other things that are provided I wasn't aware of."

"Honestly from the get go, I just needed to trust my gut and I still don't have all the answers today but I have more than I did a year ago," Sweeney said. "That being said, that will help Kaleb in the long run."