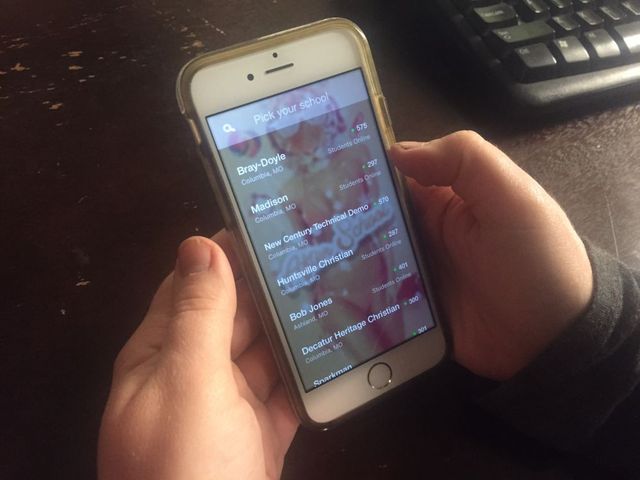 COLUMBIA - A new app called "After School" has parents and school officials concerned in mid-Missouri. The app is like Yik Yak and allows elementary school, middle school, and high school students to post to the app anonymously. The problem for adults is that only kids who go to the school can actually get into the app and see what is being posted.

Once the app is downloaded, it asks to log-in through Facebook. Then it uses Facebook settings and location settings to determine whether or not the user goes to that school, that's why adults can't get into it.

Thousands of teens across the country have access to the application, and many parents and administrators do not yet know about it.

KOMU 8 News reached out to Columbia Public Schools and Jefferson City Public Schools and neither knew about "After School" yet, despite the fact that both school districts have close to 500 students using it - and that number is expected to grow.

The app is meant to be a place for students to share feelings, thoughts, crushes, and photos, but it is also a place where students can anonymously bully and post cyber-threats.

Tech specialist at Hallsville Public Schools Nikki Schwartz said the problem is that parents do not feel like they can monitor what their kids are posting.

"I think they can be really scary, the one thing that people talk about that make this one scary is the fact that adults aren’t technically allowed on the app," Schwartz said.

The app's icon is a tiger wearing sunglasses.

"After School" may not be as scary for parents as it may seem though.

The app's website offers a lot of resources for parents about the app and cyber bullying. There is also a form parents or students can fill out if they feel they are a victim of cyber crime.

The creators of the app said there is a zero tolerance policy for bullying.

"Posts that violate the community guidelines due to bullying will not be viewed by the school’s feed in which it was posted, and the poster may be permanently banned from After School," the creators said.

Another aspect of the app is that if someone posts something about possibly hurting themselves, a counselor reaches out through the app. The creators said they have successfully helped kids through the feature.

"If you notice something that's unusual, and you aren't familiar with that app, then you need to do some research and understand what they are now accessing," Perkins said.

Schwartz said parents should also sit down and have conversations with their kids about the do's and don'ts of social media.

"The biggest thing is just for parents to feel comfortable to sit down and talk to their kids, or really most of those parents are paying for their phones, their paying for the devices. Their privacy is not as important as their safety is," Schwartz said.

Schwartz also recommended using a common charging area that is out in the open, so parents can check their child's phone.

Editor's Note: KOMU 8 News spoke with Michelle Baumstark who initially said she did not know of the the app, but later explained CPS already did have the app blocked on its campuses.

After our story aired, the After School Communications Team sent KOMU 8 News an explanation of the app.

"Every user is required to sign in through Facebook to verify that they are in high school. To join Facebook, users are required to be 13 years of age or older, which complies with the Children’s Online Privacy Protection Act," After School App official Michael Luchies said,  "We also have verification procedures to confirm users who state they are 17 or older actually are, having them verify through a driver's license. This information is not stored, but verified and can be used with their phone being in airplane mode."