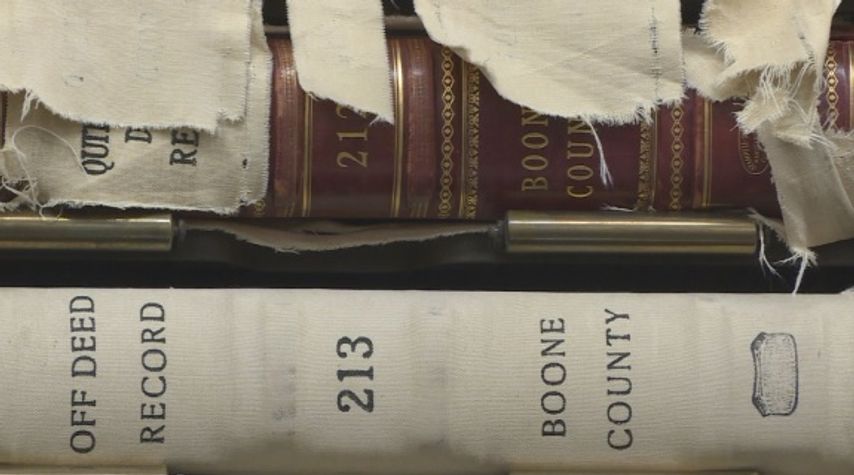 COLUMBIA - Property restrictions based on race and ethnicity are not a thing of the past. In fact, they can still be found today, including in Boone County, even though they've been unenforceable for decades.

KOMU 8 News dug through property records in the county recorder's office to find this type of covenant still on the record today. After spending days in the office, Target 8 identified 11 covenants that specifically stated black people are not allowed to live in certain communities.

Once KOMU 8 News found the covenants, we found other people working on the same research. One city councilman has even taken steps to talk about it in the community. He said understanding the current context of racism needs to start with looking at history, including things like race restrictive property covenants.

Rachel Brekhus, a librarian at Ellis Library, is digging deep into America’s past to a time when certain property could not be sold to African Americans. It's part of a tedious project she's working on, documenting racially restrictive deeds in Boone County.

Her goal is to develop a data set so historians, and people interested, can have something accessible and easy to work with — and she's looking for volunteers.

She and a student have found over 80 restrictive deeds so far from areas like the Grasslands subdivision, Bateman Place addition and Western Heights addition.

The exact language used can vary from deed to deed.

Some of the land was owned by key public figures in Columbia like James S. Rollins and John A. Stewart, who both have streets and other noteworthy landmarks like parks and buildings named after them.

Brekhus found one restriction between Sigma Alpha Epsilon fraternity and the Stewart family.

“This one was unusual in several ways,” Brekhus said. “It was the only one I've seen so far where the racial part of it talks about the Negro or Jewish race. It was also the only one that disallowed these people from enjoying the property.”

In 1948, a US Supreme Court case, Shelley v. Kraemer, made it so restrictions based on race were unenforceable. The Fair Housing Act of 1968 made them illegal.

“There’s city racism, there’s institutionalized, legalized racism that affects people even today, even though these things are completely unenforceable and have been since 1948 and actually the practice is all over the country.”

In order to change the restrictions that are filed, a landowner would have to gather signatures from a majority of the homeowners on the land. Nora Dietzel, Boone County Recorder of Deeds, said a new document would need to be drawn up by either the person wanting the change or the homeowner’s association.

“They would have to have a majority of the landowners sign off on that, and then that would be filed here in my office also and it would take precedence over the older document,” Dietzel said.

The documents are not prepared in her office, only filed after being completed.

“It’s a very quick process for us to record that and put it on record and we immediately hand it back to the person that filed it and it’s a done deal,” Dietzel said.

“I think a lot of people feel that since the Civil War in the United States of America, we have kind of gone beyond that and everything’s pretty much level now. But it really isn't,” Thomas said.

He’s also hosting “Constituent Conversations” at Dunn Brothers Coffee. He’s hoping the conversation will lead to suggestions for addressing poverty and racism in Columbia. He’s asking questions like "Why is race such a significant predictor of poverty?" and "What is race?"

“The reason why I'm interested in writing about racism and poverty is that I think there are a lot of misconceptions about it, and I think there’s a lot of lack of knowledge about the history of racism in particular,” Thomas said.

“People who don't even end up or start out wanting to be racist find themselves enmeshed in a system that is racist,” Brekhus said.

“It’s because there were systematic forces particularly in the 1950s and the 1960s regarding access to housing and access to the wealth building process of owning a house that were available to whites and not available to blacks,” Thomas said.

He said the first step to fixing the problem is by understanding the history.

“The fact is that there is a history of white people dominating other races and creating the unbalanced playing field that we have right now,” Thomas said. “And we need to understand it, and then we need to create a vision of a truly equitable society that does not discriminate.”

Melody Cox and Ethan Stein contributed to the research of this story.