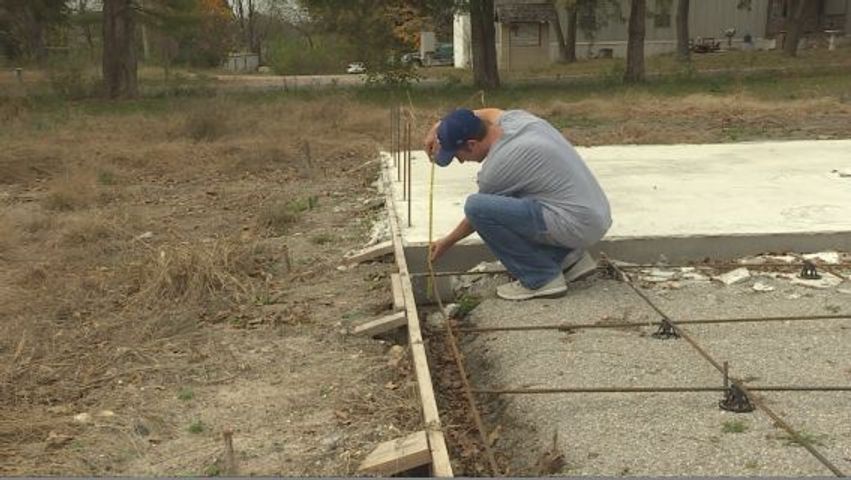 SEDALIA - Jason Johnson said he hired Brad Kern, the owner of Bestway Home Improvement, in June 2016 to build a shop for his property. He said only about a third of the work was completed after two months and was not done correctly.

"The whole time he was out here working I was always questioning what he was doing," Johnson said. "He wasn't doing anything right, so I would ask him about it and he would do it somewhat right."

He told KOMU 8 News the majority of the work done by Kern was not done properly and took more time than it should have.

"I would come out here, and most of the time he was always sitting in the chair on break and I hardly ever saw him doing anything," Johnson said.

Johnson said he paid a $9,000 down payment at the beginning of the work and signed a contract that stated the total payment would be $30,000. He said the first red flag came soon after Kern started the work.

"When they got the forms put up and the gravel spread, and they didn't even have a footer or a thickened edge or anything dug out," Johnson said.

Johnson said after many attempts to get his money back from Kern, he reached out to the Sheriff's office.

There is an active warrant to arrest Brad Kern, the owner of Bestway Home Improvements. The warrant was issued on Dec. 27, 2016, and the probable cause statement from the Pettis County Sheriff's office stated:

"A proposal/contract was put together by Mr. Kern on May 20, 2016 and signed by both parties. Mr. Johnson also stated he wrote out a check #756 for $9,000.00 on June 20, 2016 to Mr. Kern for supplies/labor and would begin the work today. According to Mr. Johnson, Mr. Kern had done little or poor work on the property and Mr. Johnson was becoming concerned and displeased."

Johnson said another red flag was when he realized Kern did not have all the tools he needed for the job and had to borrow some from neighbors.

Johnson said when he told Kern about his concerns with the work, Kern said it was fine. Johnson eventually told Kern he no longer wanted him to work on the project. He said he tried to call Kern multiple times to get his money back but was not able to contact him and went to his house to talk to him.

After trying multiple times to reach Kern, he told KOMU 8 News Johnson was violent and harassed his family on his property. He said Johnson brought a gun to his house and threatened him. He also said Johnson tried to change things on the contract after Kern had already done some of the work and would not give him some of his tools back. Johnson denied those claims.

The handwritten contract described the final product to include:

Sedalia City Attorney Anne Gardner said a handwritten contract is better than no contract at all, but it is still a red flag. She said another thing that should be included is a date the work will be finished by, which was not included in Kern's contract with Johnson.

After reaching out to city officials, KOMU 8 News discovered Kern was also operating his business without a license. City Administrator Gary Edwards said businesses are required by law to have a license so they city can be aware of who is doing business.

"They're breaking the law if they are operating without a license," Edwards said.

He said city officials will step in now that they have realized Kern has been doing business without one.

"For this particular case, our research has indicated that this person has not gotten a license, so it's something we will pursue," Edwards said.

The Missouri Attorney General's office is also in the process of reaching out to Kern after Johnson filed a complaint.

"Real estate and construction work are in our top ten of complaints every year, last year we received well over 1,000 complaints of this exact nature," Bindbeutel said.

Bindbeutel was not able to comment on this specific case, but said in most cases, contractors become too busy to keep the promises they have made because they have so many responsibilities.

Kern declined to speak with KOMU 8 a second time and said in a text message that he has closed down his business.

"I've closed down Bestway because of my back injury because of Jason Johnson, and since I've last talked to you he has harassed me to no end, even tried to get me to add him and his family members up on Facebook."

The probable cause statement also stated Johnson received information that suggested Kern would soon be leaving the state.

"This suggests that Mr. Kern is not intending to complete the work or return any material that he was paid for. Thus depriving Mr. Johnson of the material as well as defrauding Mr. Johnson by not completing the work where he had already received a payment for."