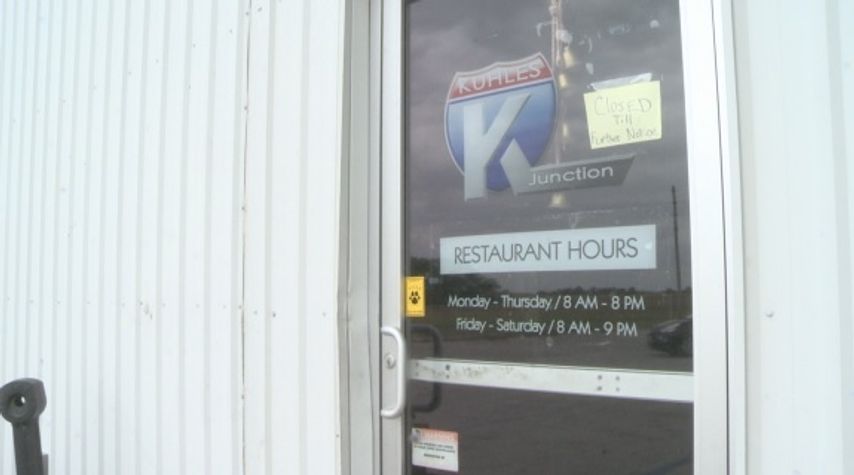 STURGEON – No paychecks and no answers. That’s the story for 22 employees after the closure of Kuhle’s Junction, a restaurant and gas station combo in Sturgeon.

The company unexpectedly closed on Sept. 29, failing to tell employees or even give them a warning.

All that’s left is an empty parking lot with a single sign on the door stating, “closed ‘til further notice.”

“This is a 20 mile drive for me,” head waitress Meghan Price said. “I show up, and I notice there are no cars in the employee parking lot. I tried to go into the back door where the kitchen is, and it is locked. No one contacted me.”

Price worked at Kuhle’s Junction for a little more than a year and said she never expected anything like this.

John and Sandy Kuhle are the co-owners of Kuhle’s Junction. The two are in the middle of a divorce and as of roughly two months ago, he said she became the manager of the restaurant/convenient store.

“My accounts are frozen because of the divorce. I have no access to my money. I’m trying to pay my employees even though it’s Sandy’s job, but she’s nowhere to be found,” John Kuhle said.

He showed KOMU 8 News documentation detailing the management transition from him to her, and it states: “Sandra Jean Kuhle is the current General Manager for Kuhles LLC. She is authorized to conduct 100% of all financial, and assets transactions as she sees fit; Furthermore, she shall be able to execute any actions needed to run the company on behalf of the company with permission from its members or owners.”

Carol Vorhees is a single mother of two and worked at the convenience store side of the business. She told KOMU 8 she and the other employees have only talked to John and Sandy Kuhle via text message.

“For the longest time he ignored us, and finally he responded saying he had no access to his money. He told us he didn’t pay us because he didn’t have access to our hours,” Vorhees said. “For him to say we need to be patient and have empathy for him is ridiculous.”

Price also said some of the text messages were not as pleasant.

“Sandy sent me a text that was pretty hateful,” she said, saying it read 'I. Don’t. Have. Any. Money. Please drop the attitude.'

This was in response to Price asking when her paycheck would be ready for pick-up.

John Kuhle said he opened an account and deposited $18,000 into it. The total in paychecks owed to employees is $6000. E-mails from his personal account that he forwarded to KOMU 8 mention the possibility of tax liens if the payroll is not taken care of as soon as possible. On Aug. 7 of this year, he had a tax lien filed for the taxable period of March 1 – 31 of 2015, owing $849.46.

He is also the CEO of Kuhles LLC, a domestic limited-liability company.

Despite the back and forth, both John and Sandy Kuhle are listed as co-owners according to the Boone County Assessor’s office, thereby making both of them responsible for paying employees.

Just last week, employees did receive a bit of money they were owed. They got checks worth 58 percent of the first half of their paycheck were six days after the closure, but employees were skeptical to cash them.

“The checks didn’t have the business name on them and they could only be cashed at their bank,” Vorhees said. “I had to drive 30 minutes out of my way to cash it. My bank told me they were unable to cash it because the bank name on the check could not verify that money would be in the account at the time it was cashed.”

On Friday, Oct. 9, employees tried cashing the checks and they were unable to be cashed until they had help from a loan officer, Vorhees said.

So, what does the law say about employees and their pay at the closure of a business?

“Whenever any person, firm or corporation doing business in this state shall discharge, with or without cause, or refuse to further employ any servant or employee thereof, the unpaid wages of the servant or employee then earned at the contract rate, without abatement or deduction, shall be and become due and payable on the day of the discharge or refusal to longer employ and the servant or employee may request in writing of his foreman or the keeper of his time to have the money due him, or a valid check therefor, sent to any station or office where a regular agent is kept; and if the money or a valid check therefor, does not reach the station or office within seven days from the date it is so requested, then as a penalty for such nonpayment the wages of the servant or employee shall continue from the date of the discharge or refusal to further employ, at the same rate until paid; provided, such wages shall not continue more than sixty days.”

Missouri Department of Labor spokeswoman Lauren Schad said if someone believes they are not being paid correctly, they could either complete a minimum wage complaint form online, contact the Division of Labor Standards at 573-751-3403 or send an email to the department.

“After the Division of Labor Standards receives a minimum wage complaint, the complaint is reviewed and assigned to an investigator to conduct an investigation. If the Division determines that back wages are owed to the employee, it may only calculate the back wages due based on the difference between the minimum wage rate, currently $7.65 per hour, and the wage rate actually paid,” Schad said. “The employee may still have a basis, such as an employment contract requiring payment at the higher wage rate, to pursue a private legal remedy on his/her own with regard to the remaining wages.”

Price e-mailed a complaint to the Department of Labor and received a response stating since the business doors are closed, she would have to take the employer to court.

Since Kuhle’s Junction did not employ 100 or more workers, it was not required by law to inform employees of the closure.

“Everybody there has been affected by this brutally. We all have financial obligations that need to be met on a monthly basis and we are not able to meet those obligations. People’s electricity has been turned off, they can’t put gas in their car to get to job interviews, they are completely stuck without this money that they have earned,” said Kassy Wille, a college student at Central Methodist University and a former server at the restaurant. “When you’re dragged into the he-said-she-said there comes a point where you don’t care anymore. We just want the money we earned.”