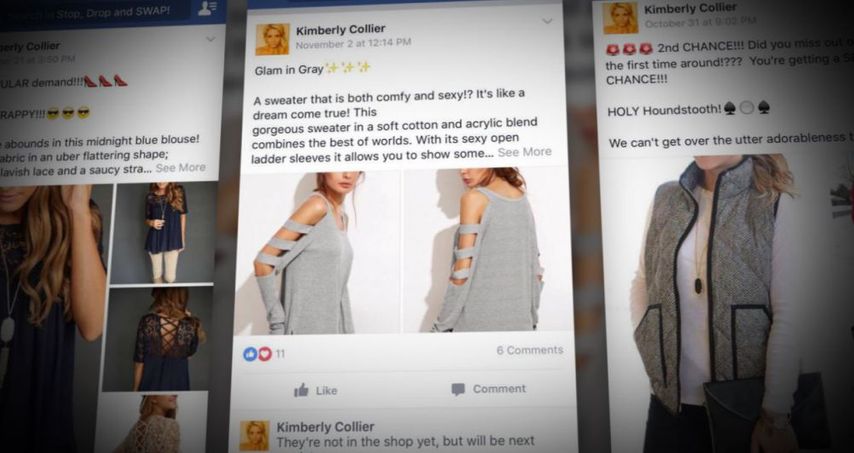 COLUMBIA — Multiple women reached out to KOMU 8 News because they were angry about one woman's business practices. Target 8 collected complaints, transaction and communication histories, and other documents from the consumers to verify their claims. The team then approached the store owner for her side of the story.

KOMU 8 initially received three emails from women who said it took weeks to get items they ordered or refunds for undelivered items from the Columbia store Stop, Drop & Swap. The store also has a closed Facebook group with around 9,000 members where the women said they placed orders.

Complaints included similar themes to the following email excerpt: "Clothing is ordered online then is never delivered. Messages to the owner are deleted. Refunds are never given to the customers."

Once Target 8 spoke with those women on the phone, they invited reporters into a Facebook group thread with more than a dozen women all complaining about the shop. They were angry about slow delivery, no delivery, slow refunds, or no refunds. They said they had never met each other, but this week they all realized they had similar complaints when they looked in the Facebook group's comments.

Many of the women said they ended up in the Stop, Drop & Swap group because the page offers free item giveaways in exchange for adding friends to the group.

Lamonia Jones said she learned about the store from a friend in Columbia and put in her first order in March. She said she didn't receive her items until May and the order was not initially correct.

"She did send me the correct items and allowed me to keep the items that she had sent that were wrong," Jones said. "So I ordered from her again, and nothing ever came."

Jones said she emailed Collier to ask about her order and received responses at first.

"Then she just stopped responding to my emails altogether so I started asking her for a refund, and she never responded and was basically just bullying me out of my money," Jones said.

Jones said she started a Facebook page complaining about Stop, Drop & Swap after not hearing back from Collier and began to talk to other women in similar situations. She said after filing a complaint on the Better Business Bureau website, she finally received her money back in small payments.

"There were maybe four refunds sent to me to total the amount she owed over like a month time frame," Jones said.

KOMU 8 reached out to store owner Kimberly Collier who said the store was dealing with a software issue when Jones was trying to contact her, which was why she was not able to communicate about the complaints.

Collier's business operates as a pre-order system, which she said not all customers may know about. She said she has to have a certain number of orders to buy in bulk, and she said that can take time for products to be ordered.

"So we know it's been addressed, and if it's nasty or ugly comments," Collier said.

Some of the women who complained to KOMU 8 News said they were given refunds only after complaining to the BBB and state attorney general's office; some had this experience as recently as in the last week.

Collier said she received notifications from the BBB this week, but she had not opened them yet. She said refund timing was coincidental and not tied to complaints. She said she has never had contact with the AG's office.

BBB Mid-Missouri Regional Director Sean Spence said while some businesses may be trying to scam customers, he does not think that is Collier's goal.

"They can just get in over their head, and it looks to me like that could very well be the case here," Spence said.

He said Collier's store currently has five unanswered complaints on the BBB website and an 'F' rating.

Spence said it is important for consumers to check out businesses they use on the BBB's website before purchasing items from them. He said in a situation like this the best thing to do is to address the complaints as soon as they are received.

"There's no reason this problem couldn't be solved if the business owner would face the complaints. It might be painful and take awhile, but it could be worked through and this whole thing could be resolved," Spence said.

Spence also said any time someone has paid for something and has not received it, they can contact the credit card company and have the charge reversed.

Collier has multiple cases listed in Boone County court records, many of them have to do with accusations of financial crimes, and others are civil or small claims cases dealing with financial claims. One claim included her business' landlord suing over non-payment of rent; that suit was dropped shortly after.

Most recently, police arrested Collier in mid-November for failing to appear in court for a charge of passing a bad check. According to court documents, she is accused of writing a check for more than $300 to All Creatures Animal Hospital using a nonexistant account.

"Customer satisfaction is of the utmost importance to me, and I take great care to thoroughly investigate any complaint, and work to quickly resolve it to the best of my ability. As with all businesses we can sometimes fall short in meeting our customers expectations; and for that we are truly sorry. But we endeavor to learn and grow from each experience; while continuing to have thousands of happy customers."

See below for court documents associated with Collier and claims brought against her in recent years.