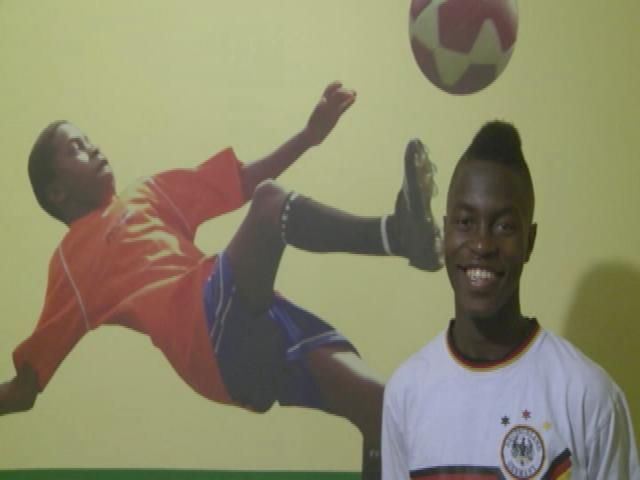 Rock Bridge forward Tarnue Tyler has helped lead the Bruins to the No. 1 seed in district playoffs this year. Tarnue scored a team-high 22 goals this season, as a freshman.

"Whenever I score, there's just a big rush and a lot of joy," Tarnue said.

"As far as skill goes, he's at the top level of high school soccer for sure," Bruins soccer coach Alex Nichols said.

"You watch him and you say that's the stuff I watched on YouTube videos," Bruins forward Ryan Stanowski said.

Tarnue has found a home here at Rock Bridge. But it's far away from his homeland, Liberia, a developing country in West Africa. Tarnue grew up in an orphanage with his single mom and six siblings. They were poor, and soccer was their escape.

"It means a lot to them because we don't have very much. It's the only fun thing we did. It got us away from all the other stuff going on. The shootings and stuff. It was the spark of our day," Tarnue said.

When he was eight years old, Tarnue was adopted by Jeff Tyler and Carolyn Henry.

"I literally woke up one morning with this sense that not just are you suppsed to adopt, but you are supposed to adopt from Africa," Tarnue's mom, Carolyn Henry said.

"It was very hard. It didn't feel like what I wanted to do at the time," Tarnue said.

But Tarnue came to America, leaving his family behind. And soccer helped him adapt.

"Everybody's different until they step on the soccer field, and then they're all just kids playing soccer," Henry said.

Except Tarnue's usually the best one on the field.

"I'm trying to set a record by the time I leave here," Tarnue said.

"He has the ability to get professional," Coach Nichols said.

"And back in Liberia, he's a hero to those kids," Henry said.

And he's a hero in his new home too.