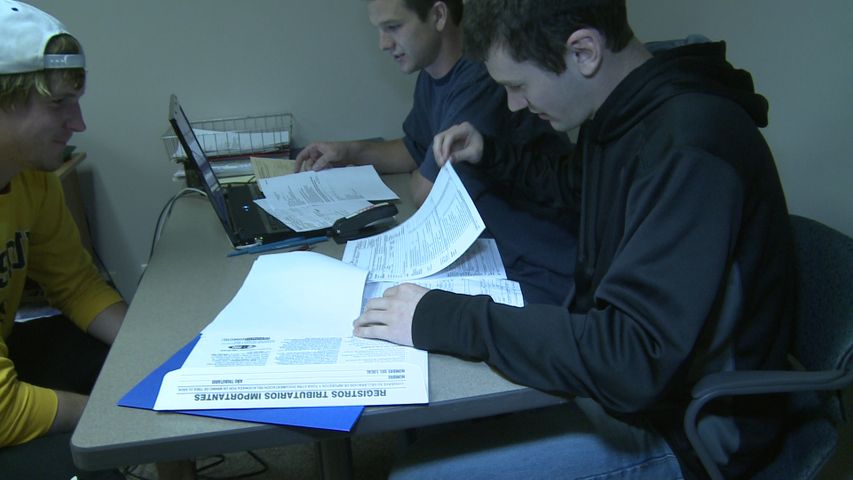 COLUMBIA - Some Columbia residents filed their taxes in February and March. Others waited until Monday to file theirs.

Because the District of Columbia celebrates Emancipation Day which fell on April 15, the original tax day deadline, the Internal Revenue Service extended the deadline. Missouri adjusted its deadline in order to match the federal date.

The post office at Walnut and Sixth Street in downtown Columbia was abnormally busy Monday morning. For most of the morning cars cycled in and out of the post office's parking lot. Many times, lines would begin to form on Sixth Street before cars could find room in the lot. Cheryl Hudson, a spokesperson for the post office, said she expects the post office will stay busy through the end of the day.

Hudson reminds people who are mailing their taxes out Monday to remember to include the required postage. She said postage prices have increased and packages that do not have adequate postage will not be filed on time.

Teri Roberts works at the Boone County Office for the IRS Volunteer Income Tax Assistance Program where she and others helped Columbia's low income and elderly populations file their taxes. Roberts said many of the people she serves filed their taxes earlier in the year. However, she said she and her volunteers will stay busy Monday to help the remaining population file their taxes.

Roberts said many people wait to file their taxes until the last minute simply because they don't want to deal with it any earlier.

"A lot of people put it off because they're afraid they owe money. Or they just simply don't want to deal with having to gather all the paperwork. It can be a daunting task," Roberts said.

There were many reasons for not filing early. Michael Lindsey said he was waiting on his wife.

"I've been nagging at my wife for probably a month. Finally she decided to do them today," he said.

His wife, Rebecca Stauffer-Lindsey says there's a good reason why she procrastinated.

"I waited until the last minute because I work an extreme amount of hours, 80 plus hours a week," she said.

There are several places in Columbia where low income and elderly people can file their taxes for free Monday. Room 005 in Cornell Hall on the MU campus will be open to assist those people until 8 p.m. Monday. The Missouri United Methodist Church is also open for anyone in Columbia from 3-7 p.m. Monday.