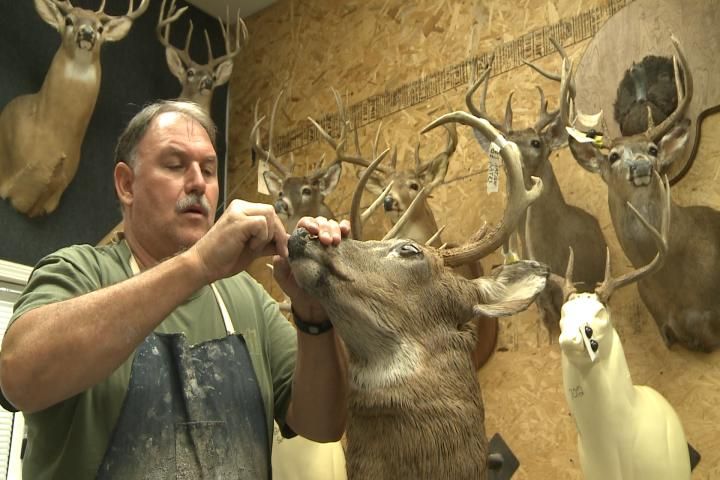 CALLAWAY COUNTY - Missouri taxidermists spoke out Friday against a new proposal the Missouri Department of Conservation is considering to help contain the spread of chronic wasting disease.

The MDC sent out a letter to taxidermists and meat processors explaining the new proposal and encouraging them to come to public input meetings to voice their opinions.

In the letter, the MDC said the proposal would not let hunters move deer they kill outside the Chronic Wasting Disease Management Zone (the brown and gray counties).

MDC Deputy Director Tim Ripperger said, "What we're asking hunters to do is if you hunt in the chronic wasting disease zone is to leave your deer there, if at all possible, so that if it does have Chronic Wasting Disease, it doesn't affect other parts of the state."

Under the proposed regulations, hunters would not be allowed to take the whole deer carcass out of any of the colored counties on the map after killing them.

Curt Shahan is a taxidermist and owns his own shop, Woodland Wonders Taxidermy. He said he's worried about losing business if the proposal goes into effect.

"It could impact me at least 50 percent, sometimes, it could be a devastating blow on some of the taxidermist shops," he said.

Kevin Crider also owns a taxidermy shop. His shop is in Monroe County, which is not part of the containment zone. He said a lot of his business comes from Shelby and Randolph counties, which are in the zone. If the new regulation passed, hunters from Shelby and Randolph counties would not be allowed to bring their deer to Monroe county for processing. Crider estimated he would lose 40 percent of his business if the regulation passed.

Both Crider and Shahan said hunters should be able to bring the deer to taxidermists for proper disposal.

"It makes more sense to let people properly dispose of it, instead of letting it lay," Crider said.

Ripperger emphasized the new regulation is just a proposal, and the MDC is only looking for public input at this point.

"We want to understand fully how it affects taxidermists and meat processors," he said. "We want to look at that and consider all ramifications before passing any regulations."

The MDC held a public input meeting in Jefferson City Thursday and will hold another meeting Sept. 1 at Powder Valley Conservation Nature Center in Kirkwood.