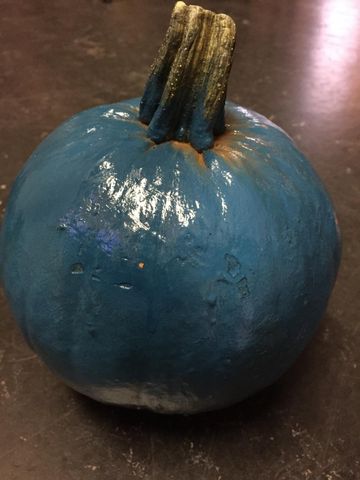 COLUMBIA - A new pop of color may be found on some front porches this Halloween.

The group is encouraging people to paint a pumpkin teal and put it on their porch or hang a picture of a teal pumpkin in their window to indicate to trick-or-treaters that they have non-food items to offer.

One Columbia allergist said that since food allergies have skyrocketed in recent years, many children could get left out otherwise.

"For a lot of kids it's all about the experience, it's about dressing up and ringing the doorbell and the tradition of gathering the candy and the parents and the child can have a conversation ahead of time and say 'we're not going to eat anything until we get back home' or 'I have some safe treats for you at home,'" Laurie Fowler said. "Most little kids, especially little kids with food allergies get it."

According to a study by the Center for Disease Control and Prevention, food allergies among children increased about 50% between 1997 and 2011.

Fowler said about 30 to 40 percent of her patients have a food allergy. She said a rule of thumb for people with nut allergies is to avoid all candy wrapped in a yellow or orange package.

"What I always tell folks is make sure you don't eat anything that doesn't have a label," Fowler said. "Sometimes what will happen is the small fun-sized candies will have different manufacturers than the large size."

Ten-year-old Henry Fender is allergic to peanuts and has had to learn which candies are dangerous.

"I think it's a great idea so they know that they'll be safe if they have a teal pumpkin," Fender said.

FARE provides a list of non-food items to offer in replace for candy on their website. Some ideas include: bracelets, coloring books, bubbles, and stickers.

"I see so many adults who buy bags and bags of candy and by the time Halloween gets there they don't have any candy left because they've eaten it all," Fowler said, "So I think we'll see the teal pumpkin project take on more and more and more as people get used to the idea and it's easy to do, just go to the Dollar Store."

While this is just the first year of the project, Fowler said she expects it will continue for years to come.

"It is promoting awareness that there are children and individuals that don't fit the cookie cutter traditions that we think about and I think what it's all about is promoting new traditions, saying you can have candy but you can also think outside the box and not always do candy," Fowler said.