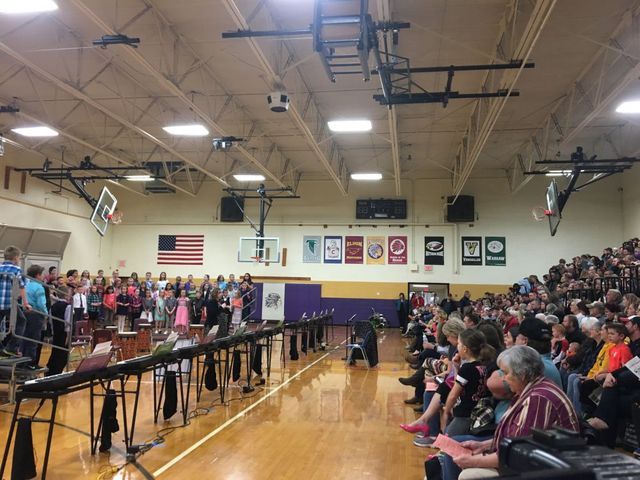 HALLSVILLE - Fourth and fifth graders at Hallsville Intermediate School practiced their chord progressions for "We Got the Beat" on 26 brand new electric keyboards in rehearsal.

Chelsea Otten, the K-5 Music Teacher in Hallsville R-IV Schools, said she was seeking out music technology to incorporate in the classroom. Her application proposed a "Totally Fab Keyboard Lab" that would incorporate piano lessons and composing projects into her lesson plans.

"I applied, and we got the news in the spring that we would be awarded a $5,000 grant to earn these awesome keyboards that we have," Otten said. "So then the next question was, 'Great! I've got this technology and how am I going to use it in my classroom?'"

To commemorate the new keyboard lab, Otten decided to go in a new musical direction, putting a contemporary twist on her upper-elementary curriculum. Otten organized a spring concert for her fourth and fifth grade students that allowed them to explore the piano, using hits from the radio as inspiration.

The set list for the concert featured popular songs from a range of eras, like the soul classic “Stand by Me” by Ben E. King to a rendition of Flo Rida’s pop hit “Our House.” In addition to learning the piano, the students played recorders and drums to accompany the songs.

Marci Minor, the director of communications for the Hallsville R-IV School District, said Otten’s revamp of the music program has students engaged like never before.

“I see it in the community side, so through social media and our parent conversations we’ve noticed that parents have been saying things like, ‘I can’t believe my kids know that Bon Jovi song!’ and people are praising Chelsea right and left,” Minor said.

Beyond infusing popular music and instruments into the curriculum, Otten said she believes concluding the school year with a concert will help her students grow comfortable in front of an audience.

“I think this a huge step for some of these kids that are crossing over into middle school next year. They’re really putting themselves out there by moving, performing, and singing these songs, some of which are from another generation,” she explained.

A study from 2004 documented “the unprecedented decline of music education” in the state of California, and schools nationwide have had to cut back or eliminate their arts programs due to budget constraints.

Yet numerous studies have shed light on the relationship between music education and educational outcomes. A 2010 report from the Missouri Alliance for Arts Education showed the level of fine art education positively correlated with student outcomes like standardized test scores, attendance rates, and high school graduation rates. Rates of discipline were also lower.

In Missouri, the state’s Board of Education standards require students to participate in fine arts programs at the elementary and high school levels; however, there are no fine arts requirements for students in middle school.

In response to the success of her music program, Otten said it has been rewarding to watch her students' piano skills improve and see their enthusiasm grow.

"Many of my students have never played a piano before, so I’ve found it motivating for them to be able to play the melodies or bass lines to their favorite songs," she said. "My hope is that our experiences this year will serve as the 'doorway in' for kids interested in piano and learning other instruments."

The spring concert marked a special milestone for fifth grader Darby Henry, as it is his last year at Hallsville Intermediate.

According to Henry, “You can’t go wrong when you’re doing a 5th grade concert, and it is the best thing you can do, with the best possible music teacher.”

For a inside look at Hallsville Intermediate School's music program, check out the following videos of the student rehearsals leading up to the spring concert.

"Living on a Prayer"