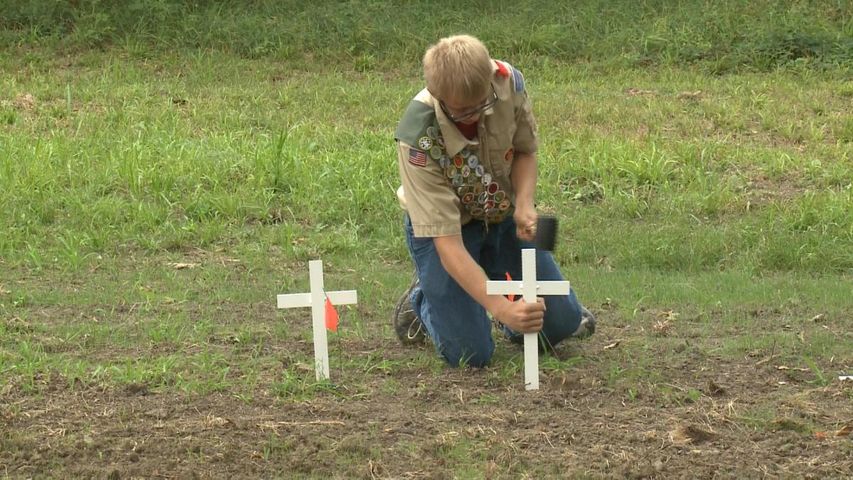 RANDOLPH COUNTY - A group of community members gathered to put the finishing touches on the restoration of the nearly 130-year-old Reynolds Cemetery outside of Jacksonville Saturday.

The cemetery was established in 1886 and includes the graves of Rosetta Owens Reynolds (1845-1930), a former slave and Harry Reynolds (1825-1911), a member of the 60th Regiment of the United States Colored Infantry during the Civil War.

The cemetery had been overgrown with weeds, headstones were out of place and some graves were not properly marked. Its restoration is the Eagle Scout project of Luke Matheis, 14, of Jacksonville. He's been working to restore the cemetery since the beginning of June and he said becoming an Eagle Scout has been a dream of his since the first grade.

"A long time ago, a person in my church named Martha Cochran told my dad that there's a cemetery that needs to be cleaned up," Luke said. "But nobody took it on until I got to the age when I needed a project."

Luke said community members, family, church members and members from his Boy Scout troop have helped him complete his project after he decided to take it on. Local companies, like Orscheln Products and Mack Hils, Inc. donated materials to help his efforts.

"Our troop jumps on anything when you ask them to help," Luke said. "They're all kind of helping each other get to Eagle Scout."

For Macon resident Monty Grant, Jr., 76, the cemetery's restoration means the ability to reconnect with family. His maternal grandparents, Essic (1877-1951) and Mamie (1885-1968) Reynolds, are buried in the cemetery.

"What they've done is a beautiful job," Grant said. "Especially when you're dealing with your heritage and everything, so many people don't realize how important it is."

"That's why I'm glad somebody took the interest in bringing it back to life again," Grant said.

Luke's father, David Matheis, said restoring the cemetery has taught Luke and him new things about his community's history.

"I had no idea we had slavery in north Missouri, that it was this close to home and just one or two generations of descendants away, they're still here." Matheis said. "Meeting these people and learning their family history has just been awesome."

Visit Luke's Eagle Scout Project on Facebook to learn more about the project and see the project's progress from start to finish.

Folks are out putting the finishing touches on the restoration of the Reynolds Cemetery in Randolph Co. @KOMUnews pic.twitter.com/zOi484FjV2

The cemetery, just outside of Jacksonville, had been in bad shape before Luke took on the project. @KOMUnews pic.twitter.com/7T30gJdrps

The cemetery restoration means a lot to Monty Grant, Jr. His grandparents are buried in Reynolds Cemetery. @KOMUnews pic.twitter.com/nm9gfI6UCH