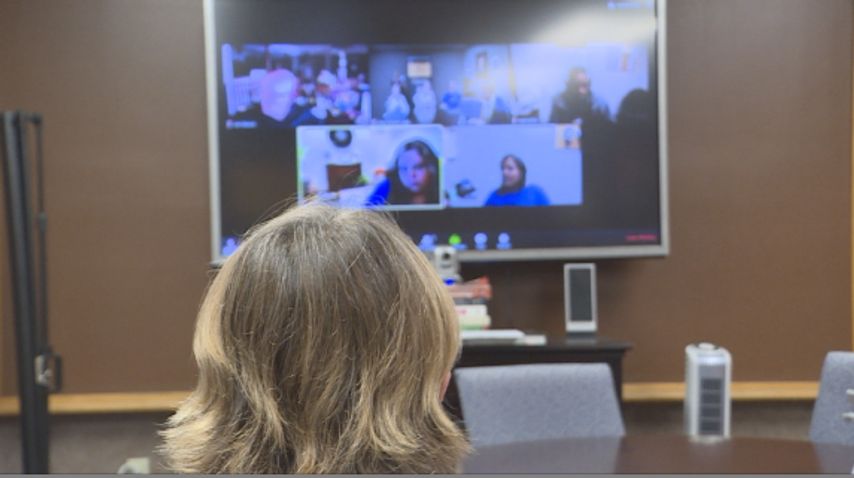 COLUMBIA - For people living far from hospitals, getting health care from specialists is a challenge. Telehealth programs bring rural hospital patients closer to specialists without the two-hour drive, taking time off work and the expenses that come with it.

The program, ECHO, "stands for extension for community healthcare outcomes. This was the brain-child of a very mission-based doctor in New Mexico. He noticed people were dying all over New Mexico from untreated Hepatitis C," Dr. Karen Edison, Medical Director of the Show-Me ECHO Program said. “He had a 10 month wait to see him at the University of New Mexico.”

Edison gave KOMU 8 News a look at how the ECHO program works from start to finish.

"From the specialty side, from our conference room, on our screen we see what looks like...The Hollywood Squares, or The Brady Bunch,” Edison chuckled.

Edison said there's usually about 10 to 12 participants on the video screen each ECHO.

"These are primary care providers out in rural areas, prisons, native American reservations... in community, presenting cases that they've seen in their own clinics and then getting advice from a multidisciplinary team of specialists," Edison said.

Edison said the first step of ECHO is the primary care providers discussing the process with their patient.

"They can say I'm going to take your case with your permission and I'm going to show it to a whole team of sub-specialists." Edison said. The provider brings the case to the team, masking all identifiers, and gets the specialists opinion and recommendations on what to do next.

It cuts out the possibility of a long drive, the extra day off work and the extra time, just for an appointment with a specialist.

“Then that provider goes back to that patient and says here's what that team recommended we do next for you. And that can be quite powerful for our primary care providers out there in rural Missouri,” Edison said.

Jon Moore is a physician's assistant at Mercy Hospital in St. Robert, Missouri, about 2 hours south of Columbia. He has participated in ECHO since the dermatology ECHO started in Missouri two years ago.

“Instead of making a consult with the University and then being seen two months later, we get it staffed and ideas and plans implemented within weeks, in what used to be months without having to put a patient in a car and have them drive anywhere from 1 to 4 hours from my area." Moore said. "I'm already on a 3rd and 4th follow-up by the time they'd initially be seen, so its all about patient satisfaction through timeliness."

This ECHO team in Columbia is what’s known as a super hub, meaning their ECHO team can train others on how to do ECHOs. They have trained people from Vietnam and Thailand.

"It’s just eye-opening, where else are you going to get a university level training for a complete hour with several residents, at least half a dozen dermatologists discussing what’s the latest and the greatest thing you can do," Moore said.

"We have great healthcare providers out there doing the best they can but they really sometimes need the input of specialty providers in different areas and you can do ECHO sessions around anything that is costly, chronic and complex," Edison said.

Edison and her team started an Opioid use disorder ECHO in September.

"When we announced it we right away had 76 people say they were interested in participating, which is a record for our ECHO programs," Edison said. "We’ve had four sessions so far and we’ve had over 30 participants so far at each session."

The ECHO's are done over the lunch-hour to give every physician, doctor and specialist a chance to take part.