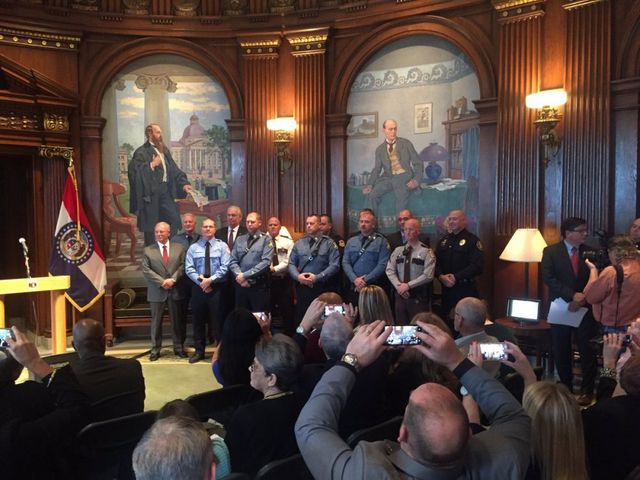 JEFFERSON CITY — Ten public safety officers from across Missouri received the Missouri Medal of Valor at a ceremony on Monday.

The Medal of Valor recipients and their friends, family and colleagues filled the governor's office at the State Capitol where the ceremony took place.

The Medal of Valor is the highest award in the state that recognizes public safety officers who "exhibit exceptional courage, extraordinary decisiveness and presence of mind, and unusual swiftness of action, regardless of his or her personal safety," according to the Missouri Dept. of Public Safety's website.

Gov. Jay Nixon and Public Safety Director Lane Roberts awarded the recipients with medals for their extraordinary acts of bravery and heroism to save the lives of Missourians in 2015.

"Each of these officers ignored extraordinary dangers to themselves, and instead thought only of the lives of others – people they had never met but who they have a solemn duty to protect,” Nixon said. "The Medal of Valor recipients carry out brave, decisive and selfless acts to protect the lives of others and make our communities safer. We should all be grateful for our outstanding public safety officers and the sacrifices they make to protect us."

Nixon also said it was honor to stand with each of the recipients and to recognize their achievements.

Among the Medal of Valor recipients is Jason A. Jameson, a former sergeant with the Boone County Sheriff's Department.

Jameson received the Medal of Valor for his act of service during a snowstorm on February 28, 2015. He was responding to a homicide scene North of Columbia where two died and a third was critically injured.

Along with a Missouri Highway patrolmen, Jameson intercepted the fleeing suspect's car. After the suspect's car was disabled, he got out of the car and pointed his gun at Jameson, who was running away.

Jameson shot the suspect twice, wounding him so that he could be taken in to custody.

Jameson said he didn't realize the honor it would bring him.

"To be honest, I think everybody in my position would have done the same exact thing," Jameson said. "I really, truly, don't think I did anything anybody else wouldn't have done. I was just prepared that day for what happened."

Jameson also that while he is relocating to Texas around where he grew up, he enjoyed his time in Boone County.

"It was a pleasure to serve and work with everybody for 13 years," Jameson said.

Jameson is now a recruit for the Arlington, Texas Police Academy.

The other Missouri Medal of Valor recipients included:

-Officer Jeffrey A. Haislip, of the St. Charles Police Department.

Nominations for acts performed during 2016 are now open and available on the Missouri Dept. of Public Safety Web site.