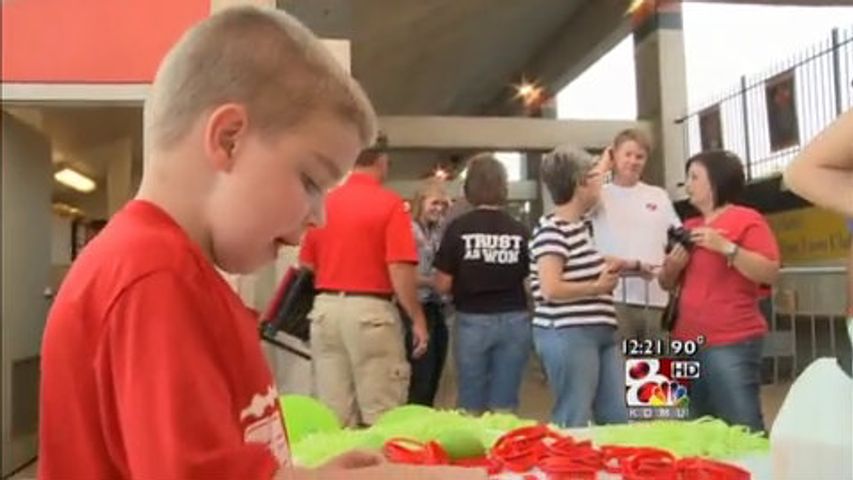 JEFFERSON CITY - Friday nights in Jefferson City are for football. But last Friday night, it was more than a football game for nine-year-old T.J. Clime.

"When he was seven in February 2012, he was diagnosed with Duchenne Muscular Dystrophy. It is the most common fatal genetic disorder diagnosed in childhood," said Sara Clime.

"Almost two years ago, it's almost as if your world falls apart. You don't know which way to go, which way to step," said Craig Clime.

"Tonight we asked for a simple table so we could pass out brochures on what Duchenne is. They have just embraced us the whole high school, the whole Jefferson City Public Schools have just done wonderful things and the whole community at large has been 100 percent behind us.

After leading the team out onto the field, Clime has a surprise waiting for him. He met up with his favorite player, former Missouri wide receiver T.J. Moe.

"Coach LePage called me the other day. I've met T.J. before. He came to one of the practices at Missouri. I've heard of his condition and he's a good kid. Coach Hill gave Coach LePage my phone number and he called me up and asked if I would be around. It's a cool thing and I'm glad to be apart of it," said Moe.

"To realize that dream tonight gives him hope and encourages him because along the way he has to see a lot of doctors. He gets poked and prodded and is so good about accepting that role in his life. He's the toughest kid I've ever met in my entire life. So for him to lead the team out onto the field, it's like a dream come true for him," said Craig.

For more information about T.J. and Duchenne, click here.