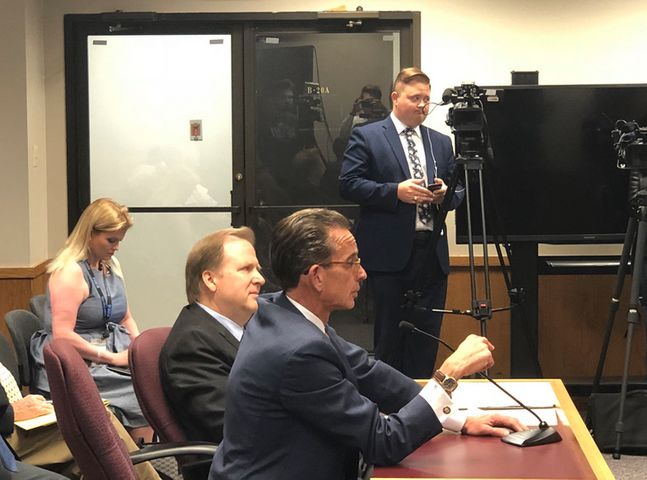 JEFFERSON CITY - In sometimes heated testimony, members of a Special House Investigative Committee looking into the Eric Greitens scandals heard about $120,000 in cash payments related to the release of the recording at the center of the blackmail allegations.

Attorney Al Watkins represents the ex-husband of the woman Greitens said he had an affair with in 2015, before his election. The ex-husband secretly recorded a conversation with his then-wife, during which she described a sexual encounter with Greitens.

Watkins said, in addition to giving the FBI the recording last year, he provided the FBI photos of cash he received in January of this year from The Missouri Times publisher Scott Faughn related to the audio recording.

Watkins says Faughn paid him $100,000 and told him the money came from a wealthy out-of-state Republican.

“I wanted to make sure it wasn’t dirty money, drug money, something that would give rise to problems,” Watkins said.

In his own testimony Wednesday, Faughn declined to say where he got the money.

Watkins told the committee the money was given to him in two payments of $50,000 - both of which came in all cash. One payment was made Jan. 8 and the other Jan. 9, according to Watkins.

He said he was also given an additional $20,000 from Faughn. Watkins said half was used for legal expenses, and the remaining $10,000 to “get his family out of town.”

Watkins said when he received the money from Faughn, he assumed it came from an anonymous donor. However, for accounting reasons, he said he recorded that Faughn had just given him the money.

He said Faughn gave him the money to release the recordings of the woman who accused Greitens of sexual misconduct and her ex-husband. Watkins said the recordings “were not part of a crime.”

“The tape, in my opinion was of zero value,” Watkins said. “It was of a very hurt woman, in a heart wrenching confession to her husband.”

The testimony was marked by a few testy exchanges.

While responding to a question from Rep. J. Eggleston, R-Maysville, Watkins said, “If you wanna hear my answer, you gotta shut up.”

Watkins apologized to the committee later, and said he was sorry he was being rude.

Watkins expressed his distaste of the governor several times throughout the testimony. Before leaving, he said he wouldn’t leave his wife or daughter alone in the same room with Greitens.