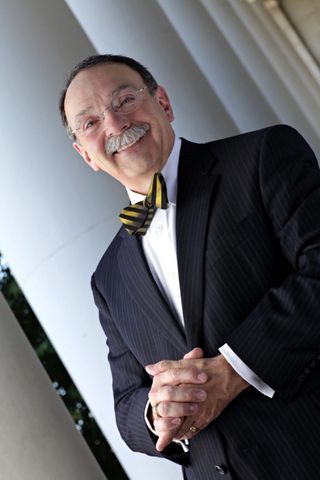 COLUMBIA - UM System President Tim Wolfe announced R. Bowen Loftin as the University of Missouri-Columbia's 22nd chancellor on Thursday morning. Loftin has served as president for Texas A&M since February 2010 and planned to retire from the position in January. Loftin is 64 years old and said he was approached about the chancellor's position a couple of months ago.

"Karin and I are so happy to merge here as part of your family. We look forward to meeting all of you over time and truly embracing this wonderful university, this wonderful city in which you rest, this great state and make the difference we can make with your help," Loftin said.

Wolfe said the UM System was attracted to Loftin partly because of his appreciation for land-grant universities, like Mizzou. Wolfe said he was the best candidate for the position and fit all the criteria.

"He also has the personality and the fit from a cultural standpoint that is just perfect for the state of Missouri," Wolfe said.

Loftin will replace former MU Chancellor Brady Deaton who served as chancellor for nine years since October 2004. Deaton retired in November of this year. Loftin will start as chancellor on February 1, 2014 and said he hopes to be here for at least five years or more. He said he's looking forward to being a part Mizzou.

"Only very few places, this being one of them, would have even offered me the possibility of finding comfort, but Mizzou is so special in so many ways and such a place that represents many things that are important to me," he said.

Loftin graduated with his bachelor's degree in physics from Texas A&M in 1970. He later received his masters and doctorate from Rice University in Houston.

According to Loftin's resume, he's spent most of his career in the Lone-Star state. As Texas A&M's president, he managed a campus of more than 56,000 students and more than 9,000 faculty and staff. When he announced his retirement this summer, he planned to stay as a faculty member for A&M, but then the opportunity at Mizzou came along.

"Kind of the transition I went through in thinking, I mean, where do I want to put my emphasis? Will it be something where it impacts a few students or where it can impact literally thousands of students? That's what really tipped the balance to thinking, well, I do have some abilities I think are important and I do have a mindset where students come first," Loftin said.

Before serving as president, he worked as vice-president of the university and CEO of Texas A&M University at Galveston, which is a branch campus.

Loftin is active on Twitter and runs his own handle, which is currently @AggiePrez. When KOMU 8 asked if he plans on changing his Twitter handle, he said he's talking with the social media team at MU about what to change it to and has already gotten a lot of suggestions from his followers. He said he's gained around 400 followers since yesterday, mostly people from Missouri.

When asked about his signature bowties, Loftin said the story behind his bowties is a long one, but said it all started with rebellion.