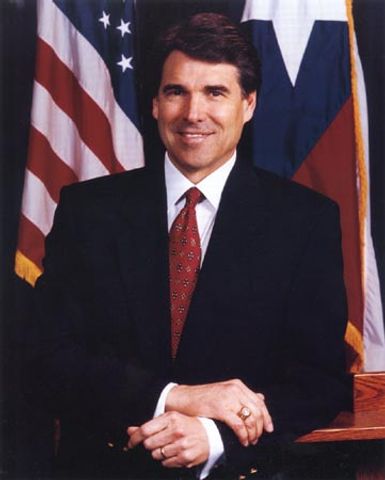 CHESTERFIELD - Texas Gov. Rick Perry did a Texas two-step in the St. Louis area Thursday,   bringing his message of lower taxes and fewer regulations to Missouri.

Perry spoke first at a Missouri Chamber of Commerce luncheon. He then delivered an evening speech at an event sponsored by Grow Missouri, a conservative Political Action Committee.

Perry claimed he is not making political waves in Missouri because he wants to poach jobs from the state.

"I truly believe that if you free up individuals from overtaxation, overregulation, overlitigation and you make sure your schools deliver a skilled workforce, nobody is going to leave Missouri and go anywhere," Perry said.

Perry brought up the 2011 World Series and said he believes it is healthy for states to compete economically because it makes each state better.

"Two years ago when the St. Louis Cardinals were playing the Texas Rangers in the World Series, you guys didn't mind that competition. As a matter of fact, I'm pretty sure y'all liked that competition," Perry said.

House Speaker Tim Jones, R-Eureka, attended the event and lashed out at Nixon while supporting Perry's vision in Texas.

"This is the first time in five years I have seen Jay Nixon concernced about anything," Jones said. "And what he's concerned about is, the GOP super majority is going to set a record, is going to make history, and make him the most overriden governor in our state's history."

Perry's intervention in Missouri politics came on a day of developments in the tax cut fight.

Attorney General Chris Koster issued a legal opinion on the bill Thursday, saying the provisions would apply retroactively and would allow filers to use the new rates on their returns from the three preceding tax years.

Although Koster provided the opinion at Jones request, Jones said Koster just played to Nixon's talking points on the bill.

However, Koster's opinion sparked some of the bill's original supporters to think differently about the legislation.

The bills' sponsor, Rep. T.J. Berry, R-Kearney, told KOMU 8 News Thursday he would be willing to work with Nixon to call a special session to fix parts of the bill that have caused backlash from other lawmakers and interest groups from around the state.

Jones said he has offered to "extend the olive branch" to Nixon and would be willing to work through a special session to modify the bill.