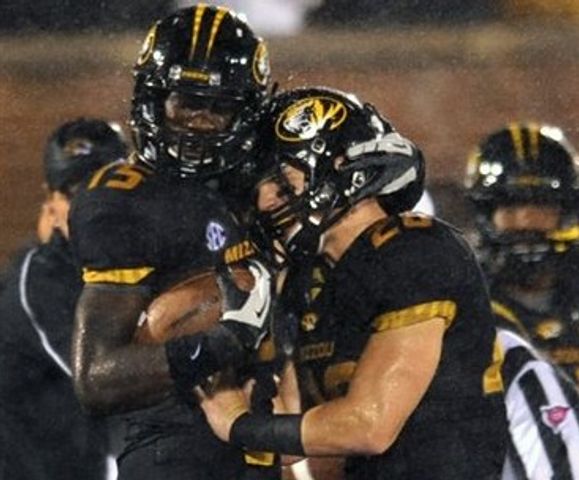 COLUMBIA - According to documents obtained by KOMU 8 News from the Columbia Police Department on Thursday, a burglary and assault involving Missouri wide receiver Dorial Green-Beckham occurred around 2:36 a.m. on Sunday, April 6.

The female victim who was pushed down the stairs reported "slight bruising and swelling of her right wrist and had limited movement of her fingers on her right hand. She did not want medical attention." On Sunday afternoon, the female victim went to the Columbia Police Department and shared text messages between her and Green-Beckham's girlfriend.

In the texts exchanged between the female victim and Green-Beckham's girlfriend, his girlfriend stated: "Dorial was wrong in every way and you have every right to be furious. I'm not sticking up for him but football really is all he has going for him and pressing charges would ruin it for him completely...without football he really does have nothing...he wouldn't make it in a real job."

His girlfriend also went on to tell the female victim, "I understand how upset you are. I am too - he drug me out by my neck and hurt me too...we just need to move quickly on this before he's arrested and before his warrant is public. He will be kicked out of Mizzou and the[n] not qualify for the draft next year. The coaches talked to me and explained to [m]e how serious this is and there's no time to waste at this point."

The female victim has decided to not press chargers, telling Columbia Police Department: "she was afraid of the media and community backlash since Green-Beckham is a football player of the University of Missouri and is possibly going to be in the NFL draft soon...she was afraid of being harassed and having her property damaged just because she was the victim."

When the Columbia Police Department met with Green-Beckham's girlfriend, "she stated she was fine, she had no injuries and was not concerned for her safety." The girlfriend did confirm she had texted with the female victim but when she was asked about being drug out by the neck, she told officers "she had been drinking" and "she did not remember."

Green-Beckham's girlfriend also told the Columbia Police Department that no one from the University of Missouri coaching staff contacted her about the incident, but had only spoken to Green-Beckham. A woman claiming to be the girlfriend's mother contacted the Columbia Police Department on Monday stating her daughter "did not want help and would live her life the way she wanted to."

No Arrests to Be Made in Burglary Involving MU Football Player