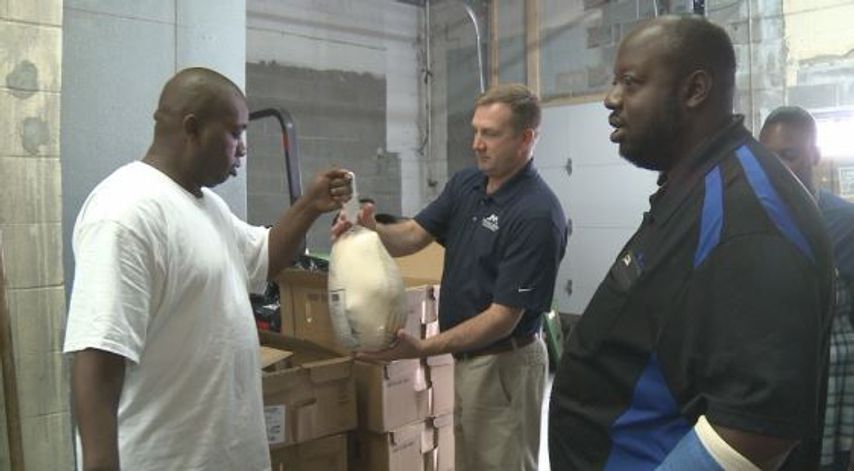 COLUMBIA - With Thanksgiving a week away, local churches and organizations are already preparing for next Thursday’s turkey dinner.

This morning, Erika Buford with the Almeta Crayton “Everybody Eats” program in Columbia, helped load 150 frozen turkeys into a truck outside a local grocery store. These turkeys, along with 150 additional turkeys, will be separated into baskets containing Thanksgiving side dishes, and distributed to community members who applied for the free meals.

Everybody Eats will also host the 19th annual Thanksgiving meal on Thursday, which is open to the public. The dinner will serve 300-600 community members and will take place at the Columbia Senior Activity Center from 11 a.m. until 2 p.m.

“They’re able to come out and talk, see people they haven’t seen in awhile,” she said.

Buford said volunteers will prepare 60 turkeys at the community event, and said the meals would not be possible without donations.

Brian Neuner with Joe Machens Dealership said the employees at the dealership heard Everybody Eats was looking for donations, and did not hesitate to contribute.

“When we came to work the next day we were talking about ‘what can we do as a group to really help out?’,” he said.

The company then decided to donate 150 turkeys to the cause.

“I think they’re pretty excited about our donation, I know we are because we know it’s going to feed a lot of people,” Neuner said.

Everybody Eats is not the only group to host a Thanksgiving meal. The Immaculate Conception parish in Jefferson City will host their annual Thanksgiving meal from 11:30 a.m. until 1 p.m. at Kertz Hall. Valda Stroesser said the parish provides delivery, carry-out and dine in options for those participating.

Stroesser said volunteers will begin preparing for the meal on Sunday and are anticipating to feed around 500 people.

“This Sunday a bunch of people get together and make the turkeys and they make the gravy that goes on and they refrigerate that until Thursday,” she said.

In Moberly, Zion Lutheran Church is hosting their community Thanksgiving dinner from 11 a.m. until 2 p.m. in the Fellowship Hall. Based on previous years, Amy Doepke anticipates feeding 900 to 1,000 people.

2016 marks the 11th annual Zion Lutheran Church’s Thanksgiving dinner and Doepke said it is one of the most enjoyable events the church hosts.

“It’s just one of those things where the committee of our church and community can get behind it together, and it just brings us so much joy,” she said.

Even the Food Bank of Central and Northeast Missouri makes it easy for people to donate to their Thanksgiving meal efforts. Shoppers can donate funds to the “Turkey Drive” at local Hy-Vee stores, which will be used to buy turkeys for those in need.