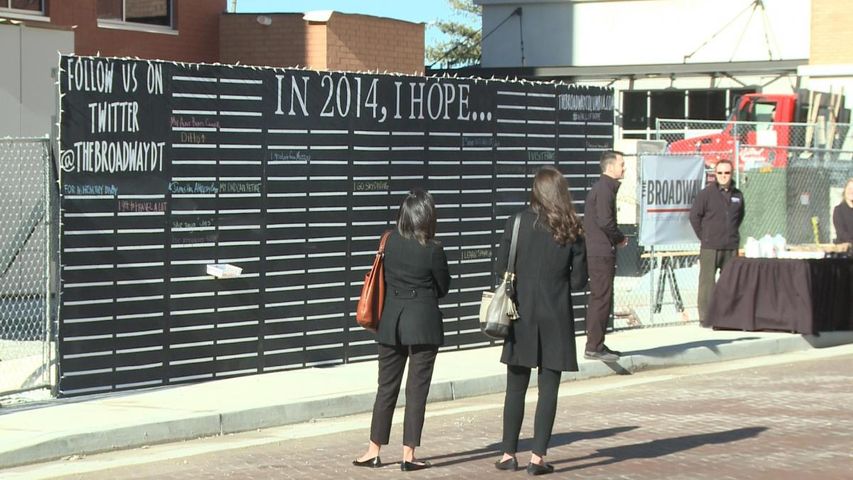 COLUMBIA - The new Broadway Hotel being built downtown unveiled its new art exhibit Friday. The Wall of Hope is a thirty-by-eight foot art piece that people can write messages on for what they hope for in 2014. The artwork is hanging on a silver fence outside the building because the hotel is still being built.

The hotel was scheduled to open in late August, 2013, but is instead expected to be open in phases in early 2014.

The hotel has eight floors. The first floor is just the lobby area, then floors two to seven are guest rooms and the eighth floor is going to be a rooftop bar.

The hotel will be the first federally LEED green hotel in all of mid-Missouri, meaning it will be completely eco-friendly. Luke Miller, the director of nightlife for the Broadway Hotel said there are stricter guidelines when it comes to being green.

The government sends in a person to monitor and check everything beforehand to make sure all items are eco-friendly. Miller said even though this did cause some setbacks the hotel is very proud of it.

He said the hotel also had to deal with setbacks that were out of its control, like the weather.

Another issue the hotel came across was business owners' dislike of the barriers around the construction site. Several store owners said there has been a decrease in the number of customers because of the commotion.

Miller said the staff was doing all it could to alleviate the situation, but the barriers will be going down in a couple of weeks leaving the sidewalk open. He added though they were causing problems, the hotel placed it there to protect people from getting hit with things falling down during the construction.