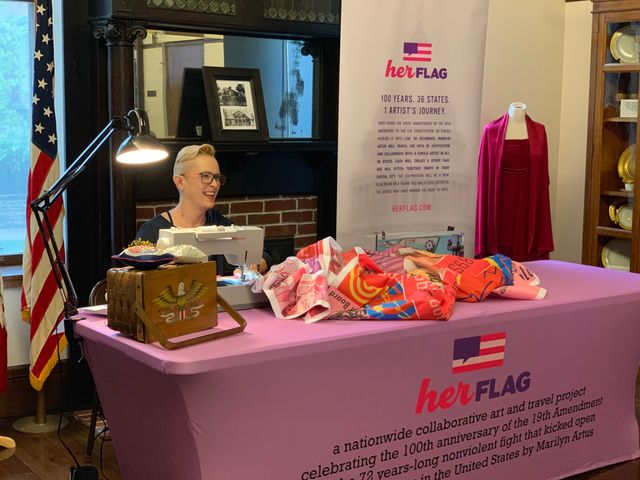 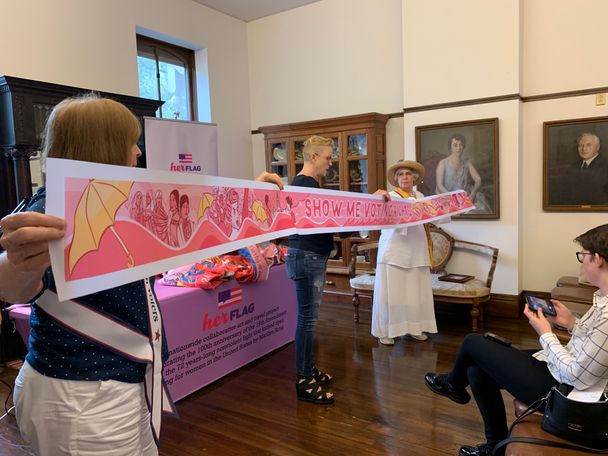 Artus and two members of the League of Women Voters of Columbia-Boone County hold up Missouri's stripe on "Her Flag." 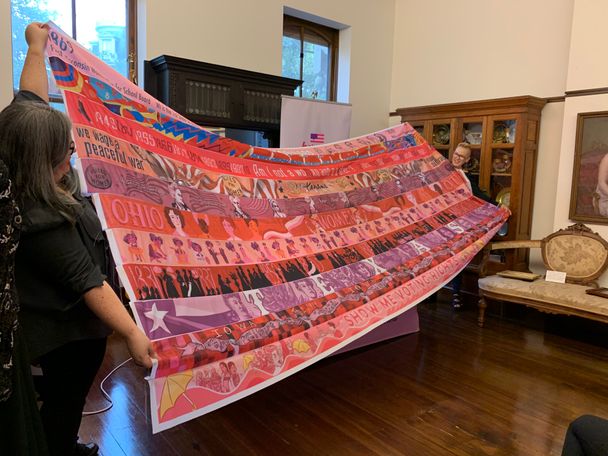 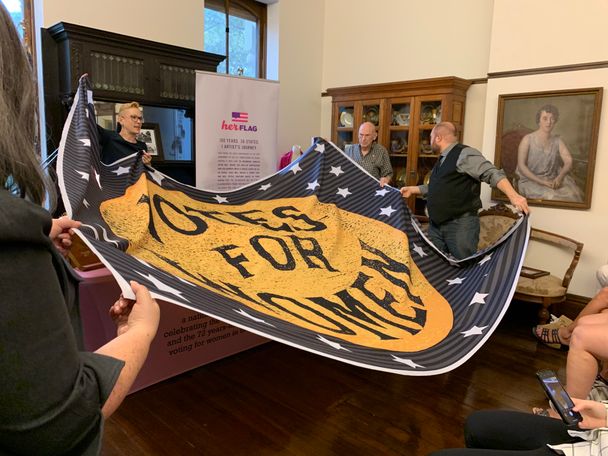 Artus and members of the audience hold the "Union" portion of "Her Flag," meant to represent the 36 states that existed at the time of ratification of the 19th Amendment. JEFFERSON CITY — 2020 marks the centennial anniversary of women getting the right to vote, and one female artist is celebrating by embarking on a journey across the state capitals — in order of when they ratified the 19th amendment.

But Oklahoma native Marilyn Artus isn’t just sightseeing. On her road trip across the country, she’s bringing a passenger: a massive 18 by 26 feet flag.

Throughout 17 trips to 36 states over the span of 14 months — with some breaks in-between — Artus will recreate the American flag in celebration of 100 years of women’s suffrage. She first started working on the project, titled “Her Flag,” in 2017.

“Years ago, I picked up a book about the suffrage movement and fell in love with that era and the struggles, the fight, the 72 year long battle it was to get the 19th amendment passed,” she said. “And when I realized that this hundredth anniversary was coming up, I knew I wanted to do something to celebrate it.”

One female artist from each of the 36 states that first ratified the 19th amendment will get to design a stripe representative of their state, which will then be sewn onto Her Flag.

“We do alternating pink and red color schemes ... so it has a unifying look. And those colors are so often associated with women, so it just visually instantly looks like it's different from the American flag,” Artus said. “I didn’t want it to look like the American flag. It's an apolitical project. It took Democrats, Republicans, men, women, black, white, everybody to get this amendment passed. So there's no political party that owns this celebration. I wanted to keep the artwork celebratory and inclusive, and [the artists] did a phenomenal job of that.”

“I lost all ability to say anything,” de Rien said. “It was just like, ‘Yay, I get to represent my state!’ and especially at a time when I'd say women aren't having the best of time here in Missouri.”

Missouri ratified the 19th amendment on July 3, 1919, making it the 11th state to do so and an early stop on Artus’s trip. She started traveling in June and visited the Show-Me state in August.

In the Cole County Historical Society building, surrounded by portraits of former first ladies of Missouri, Artus gets to work.

“The sewing is pretty quick,” she said. “So that's the luxurious, easy part of this project. It takes me about 20 minutes to sew one of the stripes onto the flag.”

Missouri’s stripe depicts the state’s women over time, with an emphasis on native women. The stripe is pink, with a river flowing across. Yellow umbrellas can be found throughout the stripe, a nod to the 1916 Golden Lane protest where silent demonstrators took over Locust Street in St. Louis to fight for women’s suffrage. The center of the stripe reads: “SHOW ME VOTING RIGHTS.”

“The confluence of the Missouri and the Mississippi is really important because it's ... these two massive rivers of North America coming together, so I really wanted to have a river aspect to it,” de Rien said. “And then I wanted this idea of time flowing, and you seeing instances of that. And then I found out about the Golden Lane and I was like, ‘Okay, umbrellas, rivers, this whole watery thing,’ and water is very feminine as well.”

Artus will visit her last state, Tennessee, in August 2020. She said she hopes to hang Her Flag somewhere in Washington, D.C., during the next presidential election. In the meantime, she plans to continue educating people about the importance of voting.

“The 19th amendment was passed, and it wasn't like all women magically got the right to vote. It was mostly wealthy white women that got the right to vote, and the Jim Crow laws in the south impeded African-Americans from voting until really not that long ago,” Artus said. “The 19th amendment didn't magically make everything perfect. We still have work to do to get more women and men voting.”