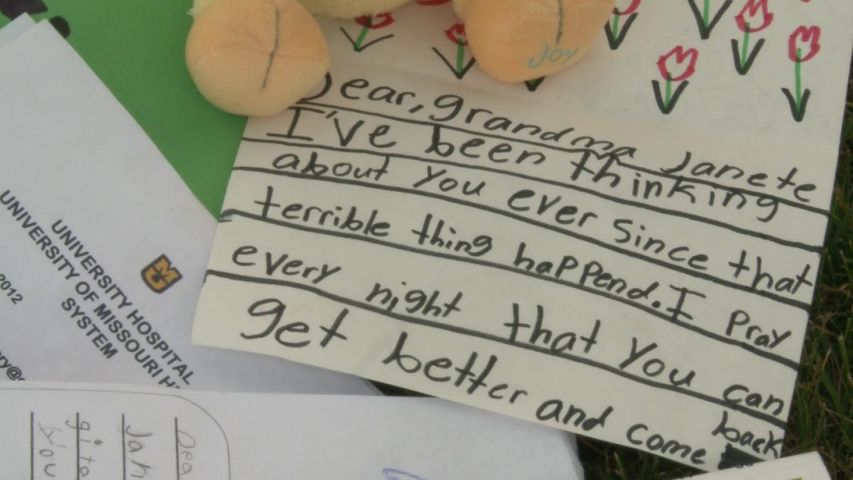 COLUMBIA - The 83-year-old woman in a wheelchair that was struck by a car at the intersection of Windsor Street and College Avenue on April 23 is now battling a pneumonia infection at University Hospital.

According to the victim's mom, Janet Barnes also known as "Grandma Barnes," is putting up a good fight.

"This woman, fighting for life, and having uphill most of her life battle to overcome doesn't complain, she smiles, she speaks warmly," said Angela Barnes.

The impact of the crash sent the 90-pound Barnes' wheel chair about thirty yards away from where it was hit.

Barnes' daughter said her mom's condition was getting better, but her condition has changed over the last two days.

"Right now, she has an infection and they're working very aggressively to keep her going and managing it."

Barnes' daughter is trying to collect 1000 thousand cards. So far, she has around 150 cards.

Many of the the cards are from children who to go Shepherd Elementary school. Barnes was a volunteer at the school for 18 years.

"This is one of the many cards from the children. This is a kindergartener -- "Dear Grandma Janet, I'm so sorry for a car hitting out of your wheelchair, Love Jaelynn."

Janet Barnes is in the Guinness Book of Records for being the longest living quadriplegic.

Ashley Barnes is having a call-in this Sunday, May 20 from 7-8 p.m for kids. She plans to record the calls and let her mom hear them.

"She is fighting now, and I don't know if she'll win or not. She is giving her every shot and I want your every support to let her know that it matters."

If you would like to send a card, address it to Janet Barnes and send it to the University Hospital at One Hospital Drive, Columbia, Missouri 65212.

To keep track of Barnes' progress, visit her blog or facebook page.