The rise of coloring books for adults 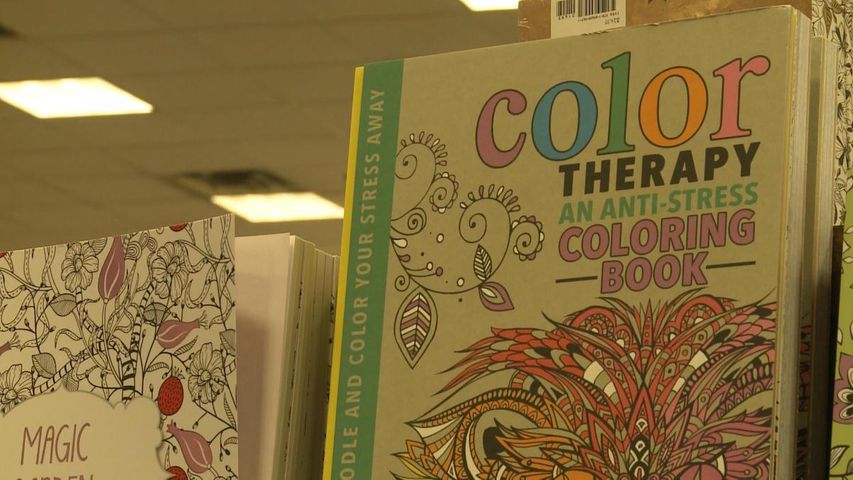 COLUMBIA - A different kind of book is flying off bookstore shelves recently.

Coloring books specifically designed for adults have a center display at Barnes and Noble and have claimed several top spots on Amazon's Best Seller list.

"We noticed that a lot of moms were getting together and coloring with their children and it just starting booming," said Lisa LoPorto,the community relations manager at the Columbia Barnes and Noble. "It's really gotten popular."

Since then LoPorto said the Columbia store has been stocking quite a bit of newer titles and sells them daily.

Mary Engelbreit, a St. Louis illustrator, didn't realize the popularity of the books until after releasing her own a few months ago.

Engelbreit said she has had coloring books over the years but this one sold like crazy.

Engelbreit's first coloring book specifically for adults, "Color ME", has sold like crazy and has been picked up by HarperCollins.

Engelbreit explained that her book features pictures and has people and houses rather than the really detailed designs.

More than just Engelbreit has jumped on board these trends, books featuring tattoo designs, optical illusions, nature, and animals are just some of the numerous subjects in these new coloring books.

"Any manner of things that you could be interested in is basically in these coloring books," LoPorto said.

But what the pull behind this phenomenon?

"You never see a stressed out 7 year old, so that's why they have gotten so popular, a lot of people just like to color and it relieves stress," LoPorto said.

Josie Sullivan, a Columbia artist with schooling in art therapy, said for her art is a way to release her emotions.

"Even for myself, even as an artist, I get into this creative block,"Sullivan said. "There might be a time I pull out an adult coloring book to give myself a mind vacation."

Sullivan compares the act of coloring to knitting or crocheting.

For Kelsey Hammond, the coordinator at the MU craft studio, coloring is a way for her to unwind but also to let loose.

"I think backing it up and doing something that we did as kids kind of takes us back to that place where there weren't rules and we weren't doing it wrong, you know you had that time, that freedom and that space to just explore and experience," Hammond said.

Hammond said the tiny designs brings the focus on the process of coloring and the pressing needs of the day are lifted.

Columbia author Marta Ferguson bases her explanation off Julia Cameron's book "The Artist's Way". The book outlines a 12-step recovery process that centers on not recovering from but to human's innate creativity.

"Sitting down with an adult coloring book, allowing yourself to be free and to be present to just that experience of line and color is foundational to being open to other creative impulses," Ferguson said.

While the books are being marketed as a type of therapy, what is keeping the ball rolling is that everyone can color. Ferguson said coloring serves as an entry point into other outlets of creativity.

"Creativity is something we can all participate in everyday," Ferguson said.

And this creativity doesn't seem to be going away anytime soon.

"We need something that is going to take our minds off all the things that we are always thinking about you know and this is a good way to do it."

The books range anywhere from 5 dollars to 24 dollars.

Loporto said she is planning on starting a permanent coloring group at Barnes and Noble.