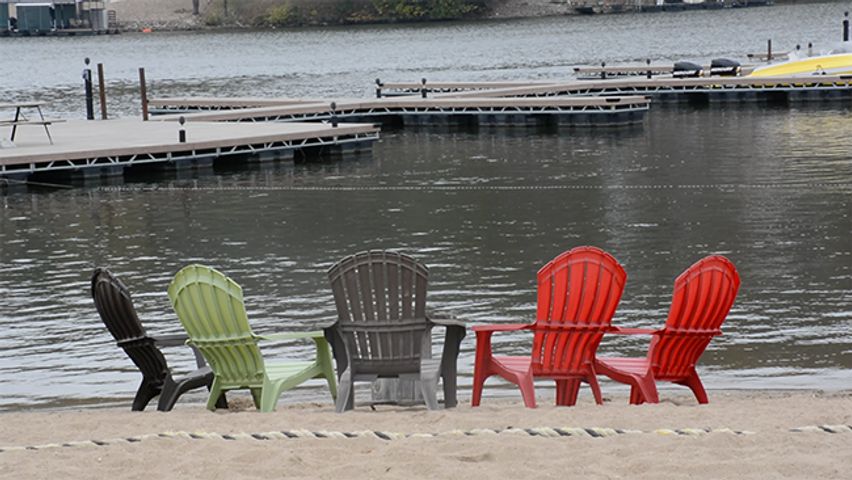 LAKE OZARK - The Strip in July has a heartbeat. It thumps under the feet of the hundreds of tourists that pack the half mile of bars, restaurants and attractions. It booms along with the nightclub speakers that blare into the night. It pulses under the wake of the jet skis and fishing boats that crowd its lakeshores. The energy The Strip radiates during the season creates a sort of gusto in the people that call it home.

Jerry Cason is a creature of The Strip. This day, he’s tossing musty life jackets into a marina’s storage unit. In about 20 minutes he’s going to finish, and make his way up The Strip to finish filing for unemployment benefits.

He winks as he says this. The woman who works the front desk at the unemployment office is cute. She’s expecting him, and at least he has that to look forward to.

Cason works long hours as a manager on the dock during the summer months, amassing a handsome salary and lots of tips. But it’s a cycle: When the weather cools, so too do the customer demands. The marina closes in November. Cason files for unemployment.

It’s the story of The Strip: It supports a flourishing tourist economy. When the tourists go away, the heartbeat fades out, taking the lifeblood of the economy with it.

Without unemployment benefits, Cason and many others would be unable to make ends meet.

The Bagnell Dam Strip is located in Miller County. During the summer months, the county’s  unemployment rate is less than 6 percent.  In the winter the number rises to nearly 8 percent according to data from the Missouri Department of Labor and Industrial Relations. The surrounding counties also see about 2 percent increase in unemployment on average during the winter months.

This is because tourism makes up for a large portion of the overall economy of these counties.

According to the Missouri Division of Tourism, 15.3 percent of tourism employment in the central region of the state comes from these three counties.

The end of the tourist season brings business to a grinding halt on the dock. For restaurants, the number of visitors dwindles as the temperature dips.

The Strip loses its charm in the winter. Windows are boarded up. “Closed for the season” signs hang on doors.

Yet Richard Cramins has learned to love The Strip, even when it fails to love him in return.

Cramins’ orange t-shirt is splattered with oil and cinnamon bun frosting. Stewart’s Restaurant, which Cramins manages, is a tourist favorite for the lake’s largest cinnamon rolls.

But when the winter months come, fewer people are around to order them. The steady stream of summer visitors slows to a trickle. Cramins must make layoffs. It is something he said he hates doing.

“They were hired with the understanding that when it slowed down we would be letting them go,” Cramins said. “It affects everybody when you let somebody go. It’s just one of those things that you’ve got to do.”

Cramins isn’t the only manager faced with the difficulty of laying employees off this season.

Even managers in cities far away from the Lake of the Ozarks will have to make the same difficult choice.

Steve Morse is an economist and director of the Hospitality and Tourism Program at Western Carolina University. His research focuses on seasonal unemployment in tourist economies.

Morse said the spikes in seasonal unemployment seen in communities around the lake is mirrored in other tourist areas such as Branson, Missouri; Myrtle Beach, South Carolina and Sevier County, Tennessee.

According to Morse, businesses must think critically about how they are going to allocate funding if they want to survive.

For people like Cramins, this involves making strategic layoffs when the season ends.

“You have to make the most amount of money during the peak times to carry you through those non-peak times,” Morse said.

Cramins’ business plan works for him. But other business models can work too.

Barton has been living near Bagnell Dam for over 15 years. After a completed military career,

Barton moved to the lake to take up employment at his wife’s business, Bob’s Sunglasses.

Their business survives by providing services to locals as well as tourists. It’s a business model that works for them, but it doesn’t work for everyone.

“Oh yeah we have a lot of locals come in here,” Barton said. “[But] we pay rent 12 months during the year and electricity. But you only take in money when people are around.”

The Strip and Cason will part ways as the day comes to a close. There’s nothing left for him there until the spring when the tourists return.