The summer climate in central Missouri is changing differently than other places in the United States, here's why 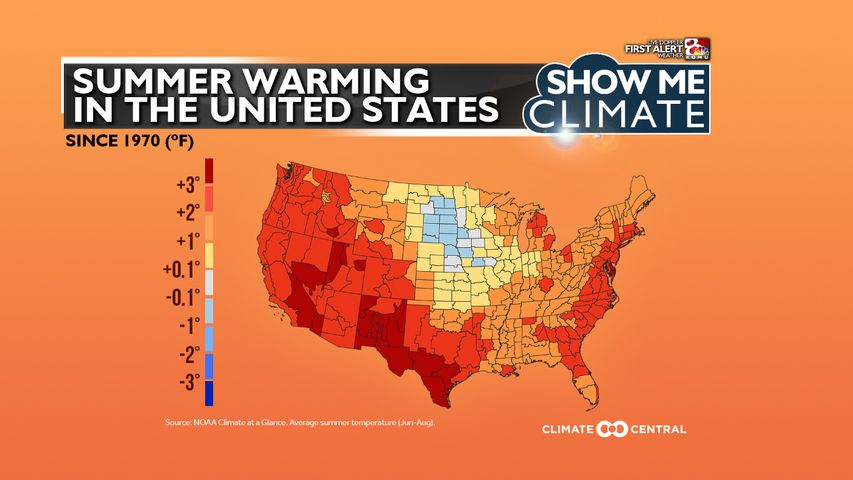 COLUMBIA - One of the main factors of our changing climate here in Missouri is the shifting of our seasons. Let’s dig into summer and how it compares to our other three seasons using data from right here in central Missouri.

Summer-like conditions are starting sooner and lasting longer. You can think of it as longer summers with spring and autumn seasons warming at a faster rate than summer, therefore prolonging the warm summer season.

Among all seasons, summers are not warming fastest. That prize goes to winter. Over the past 50 years, the rate of winter warming in Mid-Missouri has increased by more than 4 degrees Fahrenheit. Spring has warmed 3 degrees and fall is up 2 degrees while summer has seen the least amount of warming, just 1.5 degrees warmer over the past 50 years.

Digging deeper, I think some of the summer temperature stats over the past 50 years in central Missouri might surprise you. When we think of summer in Missouri the common thought is a lot of hot, sweaty days, right? Did you know in the past 50 years our average summer high temperatures have only changed by half-a-degree? Yeah, it really hasn’t budged!

The same cannot be said for our summer nights because in the past 50 years our low temperatures have warmed by two-and-a-half degrees.

So, to recap, that means the summer temperature climate in Missouri is fairly stagnant while the sun is out and actually warming while we’re under darkness. So, why is that??

For the answer, we must consider one other factor… precipitation. Summers have gained an additional 3 inches over the past 50 years. And looking at each season’s precipitation data, summer is by far the biggest gainer over time. Spring is up 0.2” while fall is actually down 1.25” and winter is up 0.75”.

So, while our mid-Missouri summers may only be warming ever so slightly, they are getting wetter.

Regardless of which season is warming fastest, summer is still the hottest time of the year and extra rainfall then leads to more evaporation. Evaporation takes a LOT of energy. That energy is mostly taken from our daytime sun and warmer temperatures. Then, as night falls, the humidity stays higher and we don’t cool down as much. This may also lead to more cloud cover which can limit daytime highs and increase nighttime lows.

By the way, it isn’t just happening to us. The central United States is seeing this stagnant summer trend and some states are even seeing slightly cooler temperatures. Meanwhile, the western, southern, and eastern United States is getting much hotter during summertime.

Our climate is changing right here in central Missouri and even in ways that may surprise. For more Show Me Climate reports visit komu.com/climate.

Analyses used 1970-2019 data from the Applied Climate Information System. Displayed trend lines are based on a mathematical linear regression.