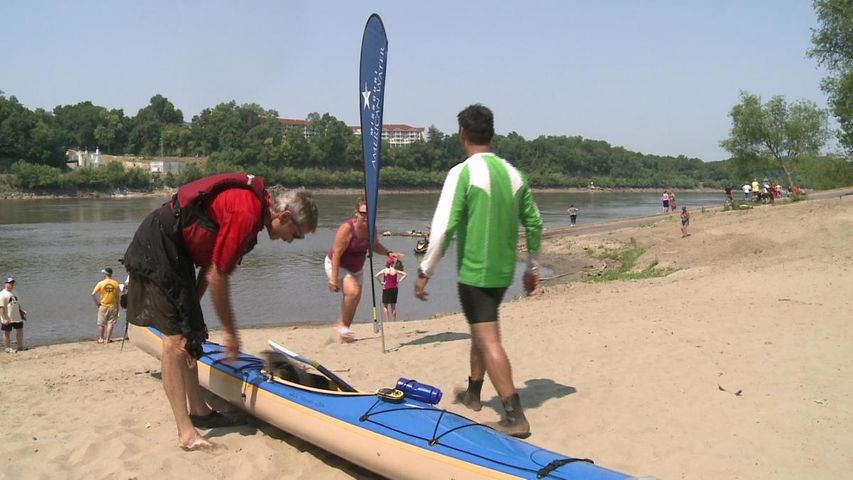 JEFFERSON CITY - More than 120 paddlers in 87 kayaks and canoes took part in this year's Race to the Dome benefiting Missouri River Relief, organizers said Saturday, setting a participation record for the second year in a row.

The race began at 9 a.m. in Hartsburg and at Providence Point, both along the Missouri River in southwestern Boone County. St. Louis kayaker Joe Baisa was the first person to reach the finish line, arriving at the Carl R. Noren Access in Jefferson City around 10:45. Baisa said Saturday's weather was excellent for the race, especially since he and his fellow racers were able to finish before the afternoon heat arrived. Participants could choose to start in Hartsburg, which meant an 18-mile trip, or at Providence Point, which entailed a 26-mile run. Baisa started in Hartsburg.

"It was a great training run. I certainly didn't expect to finish in two hours," he said.

Chad and Christina Caldwell, from Lexington, said the Missouri River's lower levels this year helped them stay with the current, which they said made the race easier to complete. Christina said the presence of sandbars helped steer them into the current, assistance they didn't have when they participated two years ago, when the river was much higher.

Race organizer Patrick Lynn said the race has grown significantly since it was first held in 2010. That year, he said there were 66 boats in the race, a number which grew to 75 the following year and then to 87 this year. Lynn estimated this year's race would raise about $5,000 for Missouri River Relief. The first two races raised a combined total of about $8,800. Lynn said the money would support the group's education and cleanup efforts.