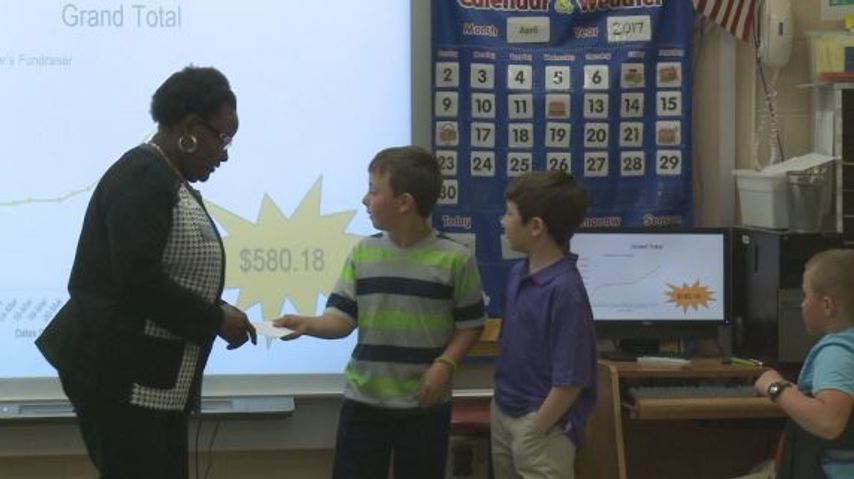 COLUMBIA - A Rock Bridge Elementary third grader presented a check for $580.18 to the Greater Missouri Chapter of the Alzheimer's Association on Wednesday.

Nine-year-old Ellis Graham raised the money with three classmates in honor of his grandmother who has Alzheimer's.

"I thought it would be a good thing to do, to try and stop it," Graham said.

The group created a power point presentation on the disease, giving it to other classrooms in the school. They also took a trip to Rock Bridge High School.

Parents, teachers, fellow classmates and others who saw the presentation contributed.

David Kern, a classmate of Graham's, decided to help because his great-grandmother has Alzheimer's.

Kern said he learned a lot about the disease through creating the presentation and that he enjoyed sharing what he's learned with others.

"I was just like 'wow what kind of third graders are this,'" Kwatamdia said. "It was such a kind thing to do, and you can see the compassion."

Alzheimer's is a genetic disease  in which the cells in the brain degenerate over time, causing dementia, psychosis, and depression. The symptoms traditionally begin later in life.

There is no known cure.

The Alzheimer's Association is a national organization which raises awareness, raises funds for research and provides patient care. Kwatamdia said the association also has helplines with licensed social workers who can help with issues related to Alzheimer's.

Kwatamdia said the money from Graham will be spread across the association's missions.

Graham said he plans to continue raising money and awareness by organizing a lemonade stand at Kern's house and attending the 2017 Walk to End Alzheimer's in Cosmopolitan Park on Oct. 1.