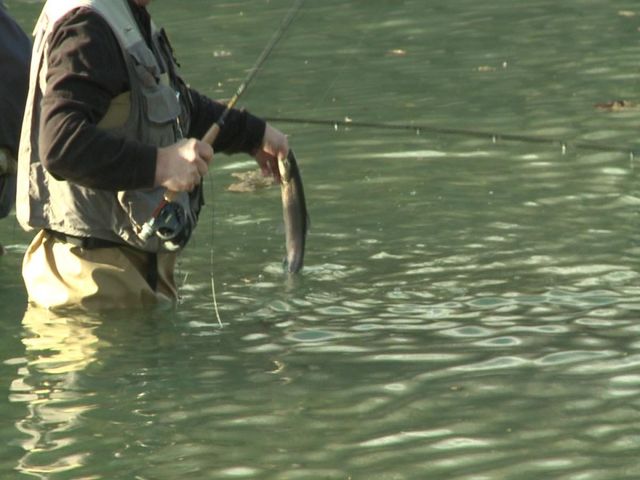 David Turner made the three hour drive from St. Louis to buy one of the thousands of tags this weekend.  He said it's a tradition for him and his friend Mark to come to Bennett Spring five or six times a year.

"I've only been out here for a few hours today and I've already caught my limit," said Turner as he held up a stringer full of four rainbow trout.  "We'll go fillet these and batter them in Andy's batter at the campsite. Can't get better than that."

Turner started coming to Bennett Spring eight years ago and hopes to make coming on opening weekend a new tradition.

For others, fishing on opening trout weekend is an already long standing tradition.

"It's tradition," said Eric Judy, the park's manager. "There's people that have been coming down here for 40 years and they'll be two or three generations all standing there in the water. They're all coming down here to have a good time."

Opening day numbers were down a couple hundred anglers, but Judy said it's a long season and there's plenty of time to make that up.

And it's a season that he plans to take a part in.

"It's torture, I want to get out there, but I can't yet," said Judy. "I've got a day off tomorrow so they might see me out there."

Turner said the key to his success Sunday was all about finding a color the fish liked.

"You've just got to find what color they like," said Turner. "Some days it can be green and the next is blue. I caught these on a crackleback."

A current Missouri fishing license and a daily trout tag is required to fish in the parks. For more information on the season's rules and regulations click here.