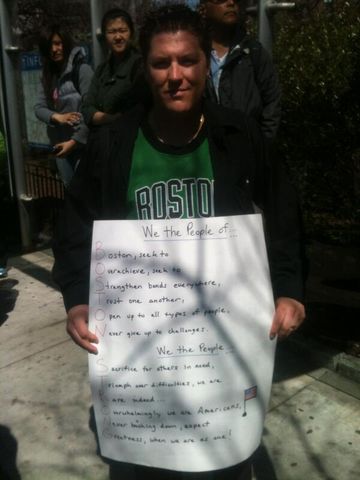 BOSTON - Today was all about coming together for the people of Boston at the Cathedral of Holy Cross. 2,000 people were inside the church - among them families of the victims, medical personnel, government officials and volunteers from the marathon.

Outside crowds were supporting with flags and banners. One of them said "We the people of Boston".

Many bystanders were hoping to see a glimpse of the President's arrival, but he never appeared in front of the church where hords of reporters were standing in line. When the memorial started Obama was there along with his wife.

"I think Obama's visit speaks volumes. Him coming to the church and for all of us is heartfelt", said Parker.

Sandy Xenos who never completed her 31st boston Marathon on Monday were among the supporters outside.

"It's obvious that the people of boston are here because they are not gonnna be afraid and run away from terrorists. If you ask anyone in this crowd to fight for this country and city they would do it", Said Xenos.

Everyone KOMU 8 News spoke to expressed a sense of unity in defying the evilness that has hit Boston and was pleased to see the many people that had showed up.

"It just shows how tightly knitted Boston is and that we will not let us break down any type of way and that we come together when tragedy happens", said Bostonian, Nita Holder.

When people were leaving the church at 11:30 a choir was singing the national anthem and people started cheering. The event was a step in the way of coming to terms with the tragedy, honoring the victims and demonstrating strength and resiliance in hard times.