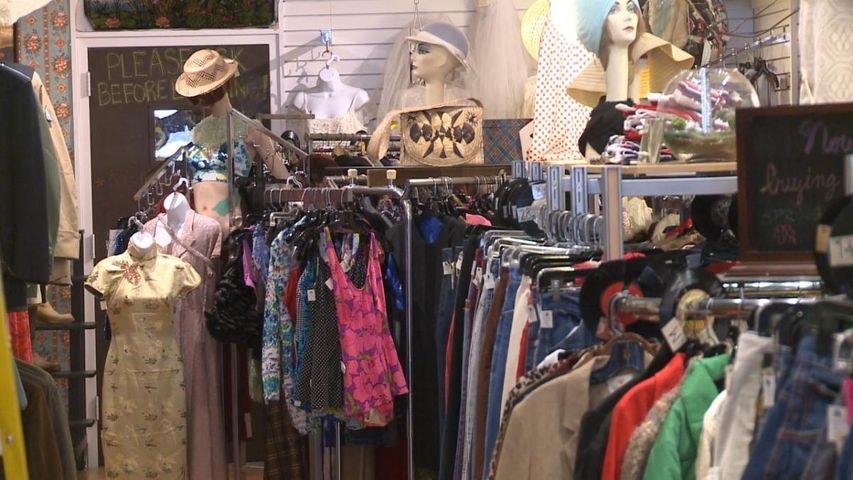 COLUMBIA - An internationally famous song means an increase in sales for local businesses.

New rapper on the scene Macklemore--whose real name is Ben Haggerty--shot to fame with the release of his song "Thrift Shop" featuring Ryan Lewis and Pete Wanz. The music video for the song shows Haggerty moseying through thrift shops with a gang of other shoppers, all looking for clothes and assorted knickknacks.

The song's catchy saxophone riff made it a number one hit on the Billboard Hot 100 for five weeks. But it's had an unexpected effect on local businesses here in Columbia.

Since the song's release, local thrift shop and vintage store owners have seen an uptick in the number of sales and customers in their stores.

Nikki Pyatt of Maude Vintage, a store with used clothing and costume rentals in downtown Columbia, said since the song's debut, she has seen several new customers.

"We've started getting college kids that have probably never heard of us before in, due to parties that are thrift shop-themed," Pyatt said.

And they're not only looking around--they're buying the merchandise, too.

"They are purchasing. It's been a blast," Pyatt said. "They come in and it's a whirlwind and we get to help them pick out the silliest things they can find."

"It's fun!" said Guthrie with a laugh. "I think anything that gets people to play, and do costuming and just like, Halloween is fun. It's fun, it's great."

While it might sometimes be hard to find that fur coat for the 99 cents Macklemore mentions in his song, the clothes appeal to customers because they sell for less than regular retail. On our trip to Maude, KOMU 8 News found a jacket similar to Macklemore's for $30 and sunglasses for $10.

So what would these vintage and consignment store owners say to Macklemore if they had the chance?

"Hey thanks for the bonus business," Pyatt said. "Way to support thrift and vintage. It's awesome."