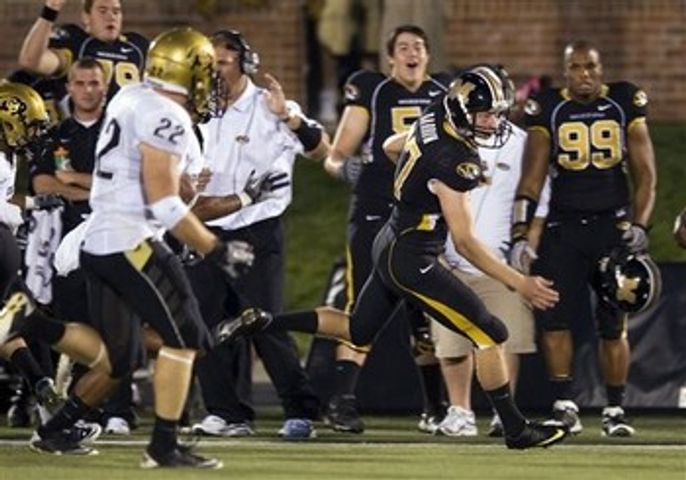 Barrow said, "It means a lot. It's pretty cool to have a record, but you know I'm not here for records. I just want to help my team out and do the best I can."

But Barrow wasn't always just a punter.  He was an All-State receiver at Moberly High School and is third in Missouri state history in kicking points.

Barrow said, "I've been a life long Tigers fan so it means a lot to play here and I think it actually makes you work harder."

Barrow lost the camp battle for the starting punting spot in 2010, but in the off season he's taken a few steps to improve and win the job.

Barrow said, "I think confidence really helped me become a better kicker just becuase knowing that you can get your job done."

Missouri punting coach Andy Hill said, "He's been doing a very nice job of locating the football, getting the ball in the exact spot, dropping the ball correctly and certainly his leg. He' s got great leg strength and this year just the drop and his consistency has been a lot better in practice."

While Barrow's receiving days are over, he showed last season that he's still got some athleticism left as gained 26 yards on a fake punt run against Colorado.

Quarterback James Franklin said, "He likes to make tackles if he can. I know you'd never want your kicker to make a tackle, but he's always really pumped because any time he gets a chance he takes it and last year he made a few good hits too."