Tigers Blank Texas in Opening Round of Big 12 Tournament 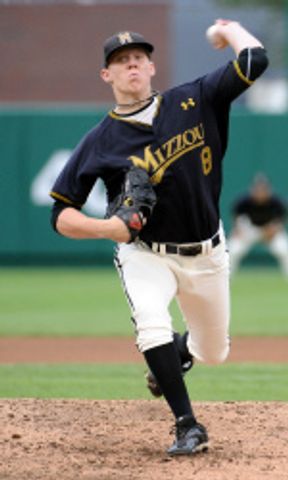 OKLAHOMA CITY, OK -- The Mizzou baseball team won its opening round game of the 2012 Phillips 66 Big 12 Tournament against third-seeded Texas, 5-0, on Wednesday night at Chickasaw Bricktown Ballpark. The win advanced Mizzou to the second round where it will face second-seeded Texas A&M, scheduled for a 7:30 start Thursday evening.

Sophomore lefty Rob Zastryzny earned his first career win over Texas as he went 8.1 innings while allowing no runs while not walking a batter on 114 pitches (66 for strikes). Also, Mizzou head coach Tim Jamieson claimed his 600th career victory as a head coach as he is now one of three active Big 12 coaches to win 600 games at their current Big 12 school.

"Just a great team effort, defense played great," Jamieson said. "Rob pitched great and we had timely hitting like we talked about before the tournament started. When you get hot you just don't know what is going to happen but the guys got it done tonight."

Mizzou was led at the plate by Blake Brown and Conner Mach, who each turned in two-hit days. Brown went 2-for-4 with two doubles, two runs and two RBI. Mach went 2-for-4 as well with an RBI. Dusty Ross came on in relief of Zastryzny to get the final two outs. The shutout pitched by Zastryzny and Ross is the Tigers' first in the Big Tournament since 2006.

"I felt like I could throw my fast ball the way I wanted to, my change-up was okay and my curve ball was there when I needed it," Zastryzny said. "I feel like Texas had not seen my best stuff yet and when I went into this game tonight, I wanted to show them my best stuff and I tried my best to do that."

Both teams got a hit in the first inning as Ben Turner laced a two-out rope back up the middle, but Mach popped up to the catcher to end Mizzou's half of the first. Texas' Erich Weiss tallied a one-out single, just past Dillon Everett at second, but Zastryzny got each of the next two batters to line out, ending the first inning.

The Tigers threatened to get on the scoreboard in the second inning as they loaded the bases with just one out, thanks to two mistakes from UT shortstop Jordan Etier. But UT starter Corey Knebel got Everett to pop up for the second out and Garcia grounded out to second on a hard-hit ground ball as the UT defense had him played perfectly.

Mizzou got on the board in the top of the third as Mach ripped a double down the left field line, putting Mizzou on top, 1-0. The defensive highlight of the third inning was Turner picking off Kevin Lusson for the third out in the frame as he caught him drifting too far towards third base. Mizzou then had a huge inning in the top of the fourth, scoring four runs off of Knebel, extending its lead to 5-0.

Andreas Plackis led off the fifth inning with a single up the middle and he was advanced to second on a sacrifice bunt by Scott Sommerfeld. Everett then singled to left field and then Eric Garcia singled through the left side, scoring Plackis. Brown then delivered the big hit, roping a ball nearly 400 feet to left center to score two runs and he later came in to score on a wild pitch from Knebel, putting Mizzou on top, 5-0.

Mizzou made three great plays defensively in the bottom of the fifth as Garcia ran down a pair of high fly balls that were pushed by the wind, one in four territory down the third base line and another deep into left field. Mizzou then posted another scoreless frame in the bottom of the fifth and that sent the game to the sixth inning. The sixth through ninth innings were scoreless as the Tigers pitching staff shut the door on the Longhorns.

The win advances Mizzou to Thursday's second-round game against second-seeded Texas A&M at 7:30 p.m. Mizzou lefty Blake Holovach is the scheduled starter. In his last start against Texas A&M, he went 6.1 innings, allowing three earned runs as he earned the win in that start down in College Station. Michael Wacha is scheduled to throw for Texas A&M. Mizzou tallied 12 hits off Wacha in their previous meeting down in College Station this season and scored nine runs on eight hits off of Wacha last year in Columbia.