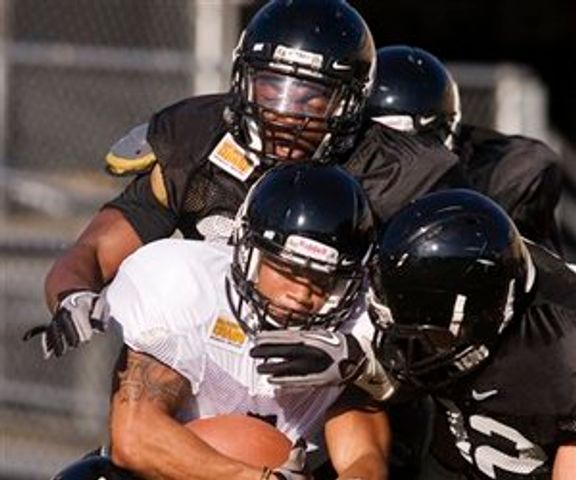 COLUMBIA - The Missouri Tigers football team held its second major scrimmage of fall camp Thursday morning at Faurot Field. Once again it was the stingy Tigers defense that came out on top with a 12-8 victory in a unique scoring system after beating the offense 18-10 in the team's first scrimmage of camp last Saturday.

Leading the defensive charge was senior CB Trey Hobson, who had two interceptions on the day, including one that he returned for 12 yards for the first touchdown of the scrimmage. Hobson's pick six stood as the only score for a lengthy amount of time until junior RB Kendial Lawrence slid free for another long 60-yard touchdown run, almost identical to the two 60-yard runs he scored in Saturday's scrimmage. Lawrence finished the day with 76 yards on 11 carries, and also caught two passes for 20 yards.

Said head coach Gary Pinkel on Lawrence's touchdown, "It was another big play. We need big plays - we've got to have guys on offense who are capable of big plays. I've said it before, if you don't have an offense that has big play people on it, you're not going to be successful."

Said Hamilton, "He's looking incredible. He's my favorite running back right now. He's shifty, but he'll hit you. One day at practice, he ran me over. He can hit, and I like that about him."

However coach Pinkel continues to rotate his running backs as Lawrence and senior De'Vion Moore compete for the starting position.

"Coach Pinkel tells everyone to go out and be ready, any position, no matter what string you are. I see the other guys and they're working hard and it seems like everyone wants to play, so that's a good thing," said Kendial Lawrence.

Perhaps the player fans are most anxious to see this season is sophomore QB James Franklin, who has some big shoes to fill given his NFL calibre predecessors. Franklin went 11-for-18 passing on the day, gaining 98 yards. Franklin also scored on a short 5-yard run and says he is adjusting to his role as a starter.

"I think the biggest difference is knowing that I'm in charge of our offense. I know I need to take charge, make plays, get the ball to the other guys and let them do what they do. So I think the biggest thing is just being smarter about it. Not taking hits when I don't need to, throwing it away and getting the ball to our guys," said Franklin.

In addition to Franklin's run, RB's Greg White and Tyler Hunt both scored on short running plays of 13 and 11 yards respectively.

Later in the scrimmage PK Grant Ressel calmly hit a 50-yard field goal to cap a scoring drive led by James Franklin and the #1 offense in the two-minute drill.

Coach Gary Pinkel was pleased with the performance of his defense in the scrimmage, but stressed the need for improvement moving forward for the entire team.

Said Pinkel, "I think again we did some goods things. I think the consistency in the first drive - the number one defense went out - they (the offense) drove the ball all the way down field, and they stopped them for a field goal. I think they're doing some good things, we just need to be better. That's the message that we're sending to our football team - we've got to feel the urgency of getting better, because we're running out of time."