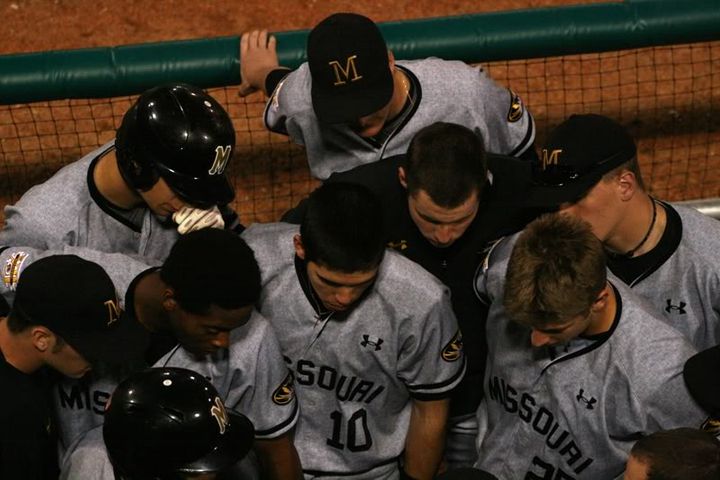 COLUMBIA - The Missouri Tigers Baseball team could not finish out the three game sweep of the Texas A&M Aggies, losing 3-2 in a rain-shortened game game Sunday afternoon at Taylor Stadium. The loss drops the Tigers to 19-25 overalland 6-11 in Big 12 Conference play this year.

The Tigers owned a 2-0 lead heading into the fifth inning, before the Aggies scored the go-ahead run in the seventh to recap the victory. The Tigers didn't get a eighth or ninth inning to make a comeback when the game was cancelled due to rain.

Mizzou scored two unearned runs in the first four innings, but only had three hits throughout the seven innings. Texas A&M starter Ross Stripling struck out seven Tigers, earning his ninth win of the season while pitching all seven innings of the game. Tiger relief pitcher Dusty Ross recieved the loss after allowing only a run in the seventh, dropping to 2-4 on the season.

Mizzou was lead by senior designated hitter Jonah Schmidt who went 1-3 with an RBI and scoring another run. Shortstop Jesse Santo also went 1-3 at the plate with an RBI. Tiger starter Rob Zastryzny struck out five Aggie batters through the first three innings. The Aggies finally got to Zastryzny in the fifth, scoring a run, and adding another in the sixth. Ross relieved Zastryzny in the sixth, and gave up the go-ahead run in the seventh, before the game was cut short after the seventh due to rain.

The Tigers did however take two of three games from the sixth-ranked Aggies in the series, good for their second-straight Big 12 Conference series win. The Tigers will be back in action on May 3 as they head to Missouri State for their final midweek game of the season. For all the latest on Mizzou baseball, stay tuned to MUTigers.com and follow the team on twitter @MUTigerBaseball.