Tigers Sneak by No. 6 Aggies with a Walk-Off Walk 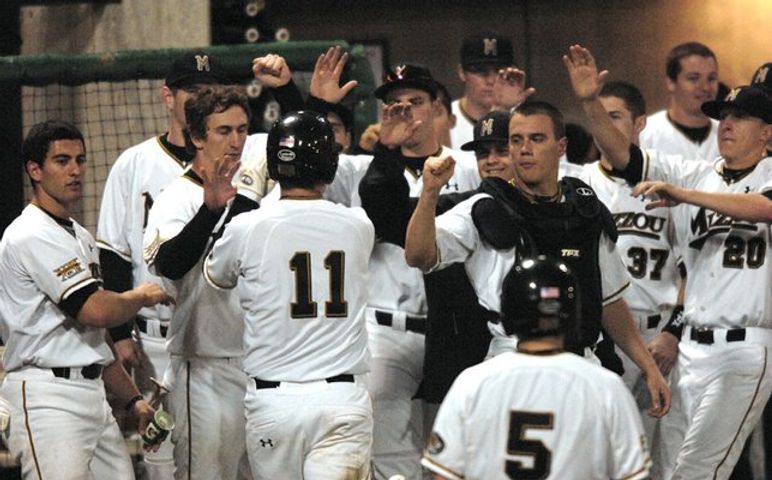 COLUMBIA - The Mizzou baseball team used a gutsy effort to rally from down 6-1 in the seventh inning to top No. 6 Texas A&M, 10-9, on a walk-off walk in the bottom of the ninth inning at Taylor Stadium.

Down 6-1 against Texas A&M's Jon Stilson, who is a projected high lottery pick in the upcoming MLB draft, the Tigers finally tallied some runs on the highly touted pitcher. Mizzou tagged Stilson with a total of seven runs in the inning giving the Tigers an 8-6 lead. The inning was started by a single from Thigpen that actually bounced off of Stilson. The following batter Jarvis then doubled, moving Thigpen to third. The next batter, Mach got hit by a pitch to load the bases. But the following two batters struckout to make it a two-out bases loaded scenario. Then, Schmidt came up big singling to left on a 2-2 pitch from Stilson, scoring a pair of runs, cutting into the lead, making the score 6-3.

But the Tigers weren't done there, because the very next batter, Brown struck a two-run double to make the score 6-5 still with two outs. After this though, Stilson got pulled for Nick Fleece, but that didn't stop the Tigers. Santo ripped a single to right field but the outfielder had a tough time with the handle allowing two runs to score making it 7-6 Tigers. The Tigers tallied one more run in the inning from Thigpen's RBI double making it 8-6.

The Aggies came right back in the top of the eighth, when they loaded the bases on McCormick. McCormick then gave up a bases-clearing double to Naquin, giving A&M the lead at 9-8. But McCormick responded and pitched a flawless ninth inning setting the stage for a Tiger walk-off.

Mizzou and Texas A&M will be back in action at 2 p.m. tomorrow at Taylor Stadium.