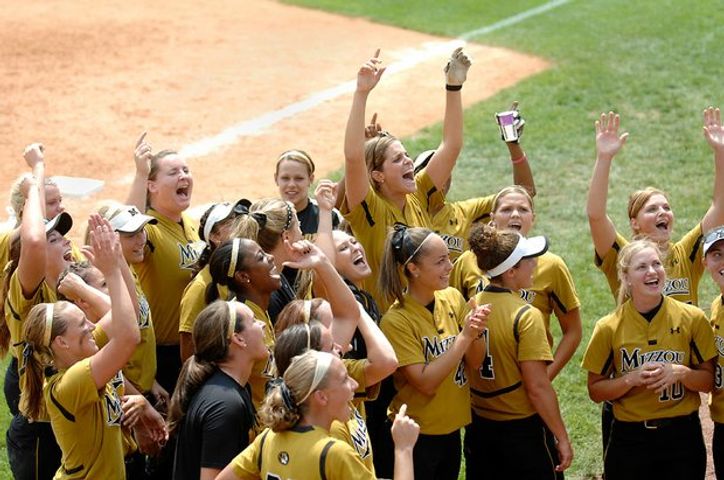 Hudson helped lead the offense to a sweep over then-No. 14Oklahoma this past weekend, as she went 5-for-10 against Sooner ace Keilani Ricketts, while doubling once and driving home two RBI. After going 2-for-4 with an RBI on Saturday, Hudson drove in the lone run on Sunday, driving home the game-winning RBI in the bottom of the 11th inning. She opened the week by going 3-for-4 with a three run home run at Northern Iowa, tying her for the team lead with nine homers this season. After batting .571 for the week, Hudson raised her season batting average from .258 to .299.

Already named Big 12 Pitcher of the Week more times than any Tiger in program history, Thomas now becomes the first Missouri player to ever win a Big 12 weekly award in two consecutive weeks. The redshirt sophomore pushed her record to 20-3 with a perfect 3-0 week in which she allowed just two earned runs while striking out an astounding 44 batters while walking only four in 24.0 innings pitched.

She started the week by tossing the first four innings in Missouri's 7-2 win over Northern Iowa, where she allowed two runs, one earned, on three hits while striking out 10 and not walking a single batter. She then tossed all nine innings in Saturday's dramatic 3-2 win over Oklahoma, scattering seven hits, once again allowing two runs - only one earned - and striking out a personal best 17 while walking three. After throwing 161 pitches on Saturday, Thomas came back and threw 163 on Sunday as she went all 11 innings in Mizzou's 1-0 extra inning victory. She gave up only six hits, struck out 17 batters for the second straight day, walked just one batter and tossed her ninth shutout of the season. The 17 strikeouts are the second most in school history. She has struck out 10 or more batters on 13 separate occasions this season and has 241 for the year to just 26 walks. Her earned run average of 0.65 leads the nation.

Hudson and Thomas lead the Tigers into a Wednesday doubleheader against Saint Louis tomorrow beginning at 3 p.m. CT.