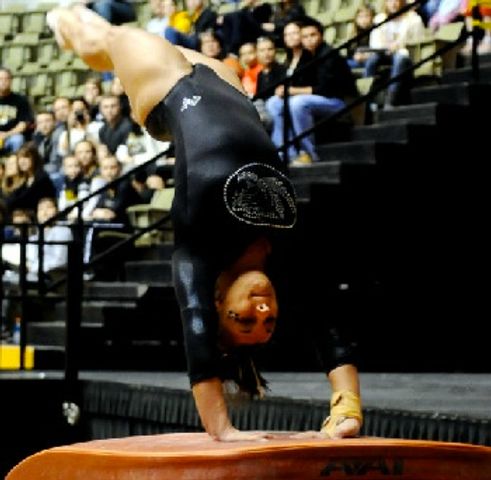 COLUMBIA -- Mizzou Gymnastics topped the Arkansas Razorbacks at Senior Night in the Hearnes Center with a score of 196.100 to Arkansas' 195.450.

The Tigers posted a season-high 49.400 on floor, which ties for the fifth-best team floor score in school history. Several Tigers set career-highs at the meet, including freshmen Rachel Updike, Colleen Mulcahy, Briana Conkle and Rebecca Johnson and sophomore Mackenzie McGill. The victory improves the Tigers to 9-6 on the season.

The Tigers continued to hold the lead in the second rotation, as Mizzou posted a 49.050 on bars. Mackenzie McGill kicked off the rotation with a 9.750, followed by Taylor Medrea in the two-spot. Medrea put up a 9.725, and both Mulcahy and Updike scored 9.825 on their bar routines to set new career-high scores. Burke posted a 9.850 and Heizelman finished her routine with a 9.800 score. After the second rotation, Mizzou still led the meet, 98.200-97.625.

The Tigers came back on floor to regain the lead with a 49.400 team score. Updike anchored the rotation with a 9.925 score and Burke earned a 9.900 to lead the Tigers as well. Conkle earned her career-high 9.875 score as the final competitor in the rotation, while both Trevino and Howard put up 9.850 scores. Medrea recorded a 9.800 to contribute to the team total as well.

The meet concludes the regular season for the Tigers as the Big 12 Championship is next on the schedule. The Championship will be held in Norman, Oklahoma next Saturday at 4 p.m.