Tigers Walk Off With Win Over Kansas State 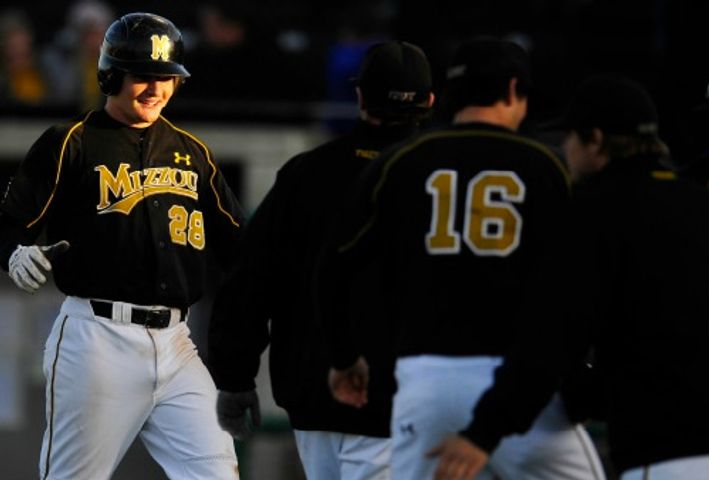 COLUMBIA -- The Missouri Tigers sprinted out to first base to mob Brannon Champagne for drawing a walk afternoon Saturday at Taylor Stadium.

With the bases loaded and the game tied, home plate umpire Curtis Alexander called the 2-2 pitch from Wildcat closer Nate Williams just off the plate inside. Williams then hurled the payoff pitch into the dirt to bring in the winning run for a final score of 4-3.

Trailing 3-2, Mizzou's Blake Brown led off the ninth inning with a base hit through the left side of the infield. Andreas Plackis laid down a sacrifice bunt back to the mound, but Williams misfired and his intended throw to first wound up down the right field line. With runners now on the corners, Dane Opel laced a 2-2 breaking ball back up the middle to tie the game. A walk to Sal Belfonte loaded the bases, but Williams recovered by striking out Nick Moore and Conner Mach back-to-back before Champagne's game-winning at-bat.

Missouri also scored two unearned runs in the bottom of theseventh inning. Eric Garcia hit a hard grounder that went right through the legs of second baseman Ross Kivett. After a flyout, Plackis hit a single that put runners on the corners, and Opel's sacrifice fly put the Tigers on the scoreboard. Belfonte made that a crooked number when his single to center plated Plackis after a passed ball moved him up to second.

Dusty Ross (2-0) got the win for Missouri (20-17, 5-9 Big 12) as he retired the only two batters he faced in the ninth. Williams was saddled with his third loss of the year for Kansas State (19-20, 3-11). The blown save spoiled the great start by Wildcat starter Joe Flattery. The junior lefty pitched 5.2 scoreless innings, allowing five hits and four walks while striking out four. Mizzou starter Blake Holovach surrendered three runs on five hits in five innings. He walked four and fanned three.

Brown and Belfonte had two hits apiece for the Tigers, and Dane Opel drove in two runs. Missouri takes a break from its Big 12 slate when it visits in-state rival Missouri State on Wednesday.