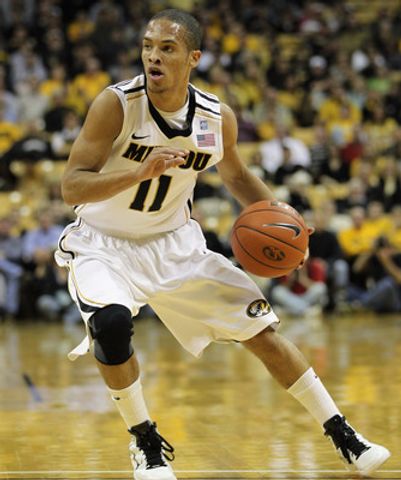 COLUMBIA (AP) - Iowa State entered Wednesday night's game against No. 7 Missouri on a three-game winning streak, propelled by 3-point shooting and Royce White on the inside.

Throughout the first half and much of the second against Missouri, the Cyclones looked like they could make it four in a row and sneak into a tie for second place in the Big 12 with one game remaining.

Cyclones coach Fred Hoiberg thought his team played more aggressively in the first half but lost its rhythm once the Tigers put bigger defenders on White, who had nine assists.

"There's some things we could have done better," White said. "Personally, I turned the ball over way too much. I just have to be strong and realize that we're not going to get as many calls on the road. We did the best we could and we look forward to seeing them again."

Missouri seemed to be caught up in the emotions of senior night, its porous defense allowing a flurry of 3-pointers by Iowa State that had the Tigers trailing for most of the game.

But when Missouri's Steve Moore dived to corral a rebound midway through the second half, it provided a spark the Tigers would capitalize on en route to a 78-72 victory that clinched the No. 2 seed in next week's Big 12 tournament.

Moore's pass found Michael Dixon who then made a half-court pass to Kim English for an easy layup with 12:12 remaining that gave Missouri a 53-52 lead, its first since 8:50 left in the first half.

"I don't know if we were winning the effort game, and that play right there was a sign of us getting back to who we are," Missouri coach Frank Haith said. "And that was a hell of a play."

It was Missouri's 13th Big 12 win, the most in school history as it prepares to leave for the Southeastern Conference next season. Finishing in second place would be the Tigers' best regular-season performance since coach Norm Stewart's final season, 1998-99.

But Haith won't allow his team to look past the next game, insisting on maintaining the same "process" that's produced consistent success this season, his first at Missouri. But the team clearly looked relived after the game, with many seniors grabbing the stadium's microphone to thank their families while English and Denmon walked into the postgame news conference with blow-up cutouts of their heads.

Missouri entered the game on its first two-game losing streak of the season, including an emotional 87-86 overtime loss at No. 3 Kansas on Saturday.

"We want to give these guys a win every time we step out on the floor," Dixon said, "not just on senior night."

English quickly added that Dixon and Pressey are the only non-seniors playing this season for Missouri.

Scott Christopherson scored eight points in the final minute, including a 3-pointer with 25.5 seconds remaining to close the deficit to 76-72. Dixon added two free throws with 15 seconds left.

Iowa State continued its hot shooting from behind the arc, draining 12 3-pointers after entering the game leading the Big 12 by averaging 8.9 per game. The Cyclones hit six in the first half and led 40-36 at halftime after trailing 7-0 to start the game.

After Missouri's early lead, Bubu Palo's layup with 8:50 remaining in the first half gave the Cyclones a 22-21 lead they kept until Dixon made a half-court pass to Kim English for an easy layup with 12:12 left in the game.

Christopherson had 15 points for the Cyclones, who lost for the ninth consecutive time to Missouri. The team shot only 39 percent from the field, but kept pace with the Tigers by taking 15 more shots from the field.

Iowa State held a 39-28 advantage on the boards, its seventh consecutive game outrebounding an opponent. The Cyclones committed 15 turnovers, which Missouri converted into 16 points.

"You've got to give those guys credit for making us turn the ball over like that," Christopherson said. "But, at the same time, we had some self-inflicted ones. And those are the ones that you just can't afford to have against a team that's that good."

Ricardo Ratliffe added 16 points for Missouri and Pressey had four assists, giving him 183 for the season and breaking the tie with Anthony Peeler for most in a season for Missouri.

The Tigers honored their eight-man senior class before the game, complete with fireworks that caused a delay early in the first half when residue needed to be mopped off the court. The class has won 103 games, most of any in school history.

"It's the end of a chapter," Haith said. "These guys have had some special moments over four years and I'm just proud that I've been able to come along for the ride this last year."