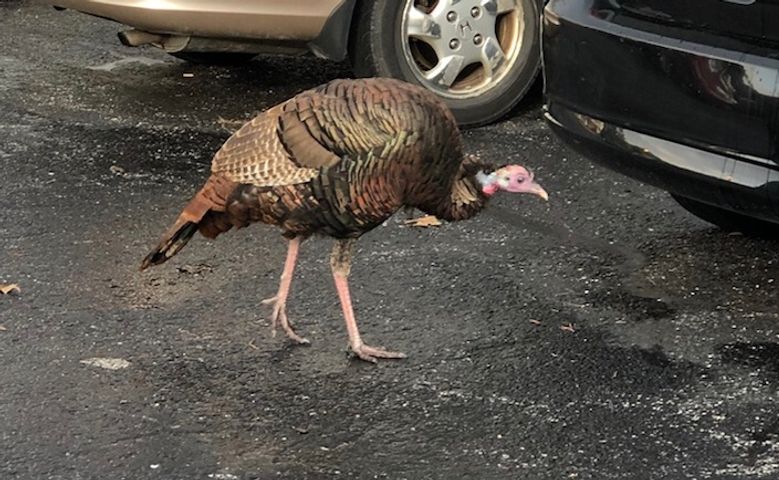 COLUMBIA - While Tina the Turkey has become a local celebrity, there is a division on whether he should be relocated to a more rural wild habitat.

Since February, Tina has made the intersection of Chapel Hill Road and Forum Boulevard his home. There's disagreement on whether Tina is truly a wild turkey since he has lived in an urban area so long.

Diane Maxwell has continually checked in on Tina since she came across him in March. She is concerned about where the Missouri Department of Conservation might take him.

Maxwell believes Tina should be taken to a location that works with more domesticated animals. She suggested Bear River Ranch in Rolla, but the Missouri Department of Conservation has not commented on whether that location would be considered.

The Department of Conservation did not tell KOMU 8 News what locations it was considering for Tina, but said it is looking into regions that are filled with more wild animals.

Tom Strother, a regional supervisor at the DOC, said the department is looking into locations where Tina would not be hunted.

"Really, the best place is out in the rural setting where he can blend in with the turkeys and be a wild turkey, which is what Tina is. Tina is a wild turkey."

Some businesses and residents near Forum Boulevard and Chapel Hill Road say they have become accustomed to seeing Tina roam the area.

Kelly Kilgore-Bietsch said she and her staff have built a relationship with the famous turkey.

"I was even wondering if we couldn't build like some kind of sanctuary back here for him, but to me, then he's just going to be trapped."

Tina's relocation would happen immediately after he is captured. The Missouri Department of Conservation said that's been a challenge because Tina "is pretty elusive and he knows people."

Maxwell said Tina has warmed up to her.

"He is personable, and it's hard not to care about him. And I understand hunters and people like that, he's a wild turkey to them and nothing more, but he's more than a wild turkey to a lot of people in Columbia."

The DOC said Tina would be captured using nets and net guns. Strother said the department does not want to put Tina under any "undue stress" during the process.

Strother said the DOC has used the net guns in the past, but it was not successful in capturing Tina.

Maxwell was there when the DOC tried to capture Tina last month. She said the net guns "sounded like a rifle" and frightened Tina enough for him to fly away - at least temporarily.