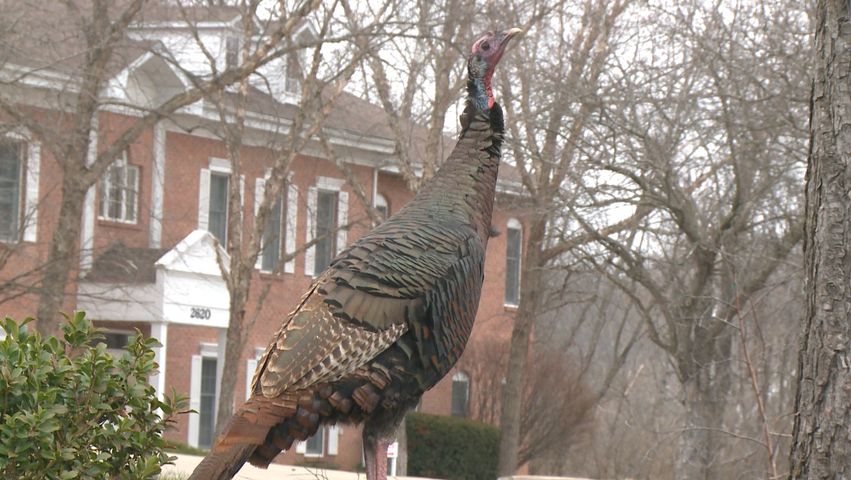 The turkey, which hangs around the Forum Boulevard/Chapel Hill Road area, is growing in popularity as he makes appearances near streets, neighborhoods or even businesses in West Columbia. (Yes, Tina is a he - explanation below).

Robyn McCullem first noticed Tina at her parent’s house on Hulen Lake when her son pointed to the turkey wandering the backyard. From there, she got a wild idea to give Tina a Facebook page.

“I guess I was probably feeling a little bit crazy that day and thought ‘I’m just going to make a Facebook page for this turkey. Why not?' And it just, you know, spiraled from there,” McCullem said.

“We didn’t want to be the face of Tina. Tina’s his own turkey and we just wanted to make sure that he got the recognition that he needed because he’s so rare,” Priesmeyer said.

As people learn about Tina through Facebook or run into him in person, many have wondered how he got his name.

“Tina was named by a group of Veteran United employees and I think they thought Tina was a hen turkey at the time not a jake, which is a juvenile turkey,” McCullem said. “So the name just kind of stuck. We never really thought to change it to anything else."

Whether a hen or jake, Tina is still chasing cars down the street and showing up on people’s doorsteps - uninvited.

Janice Downes, who works at Senior Marketing Specialists, couldn’t believe her eyes when she first saw Tina out the window at work. But now, she sees Tina almost every morning.

“I love when he gobbles and then you open the window and he’s right there,” Downes said. “It’s something to look forward to. You just don’t know when he’s going to show up.”

Tina has even been found to stop traffic by strolling in the middle of the road or chasing cars as they pass. But it’s these incidents that cause McCullem and Priesmeyer to say they worry about Tina’s safety.

“I think that’s one of our next steps officially, is to talk to the city and potentially get some signs for both Forum and Chapel Hill because it is a safety risk for both the turkey as well as drivers,” McCullem said.

They encourage anyone wanting to take pictures of Tina, to have a passenger do it, or pull over first.

For anyone who just wants to support Tina from afar, McCullem and Priesmeyer have also been selling Tina t-shirts, which Priesmeyer designed. The shirts cost $12 each and $5 of each shirt sold is donated to The Food Bank for Central and Northeast Missouri. The two women have sold more than 70 shirts so far on Ultramaxtees.com.

“The food bank is something that everyone can rally around,” McCullem said. “If we’re going to exploit this bird, it was going to be for a good cause.”

As Tina becomes a local celebrity, McCullem and Priesmeyer believe he can also be a way to bring joy to everyday life.

“Everybody loves Tina. It’s an amazing thing that a turkey can bring the community so close together,” Priesmeyer said.

“I think that that’s something to celebrate and something to keep going because the world needs better things like that right now," she said.