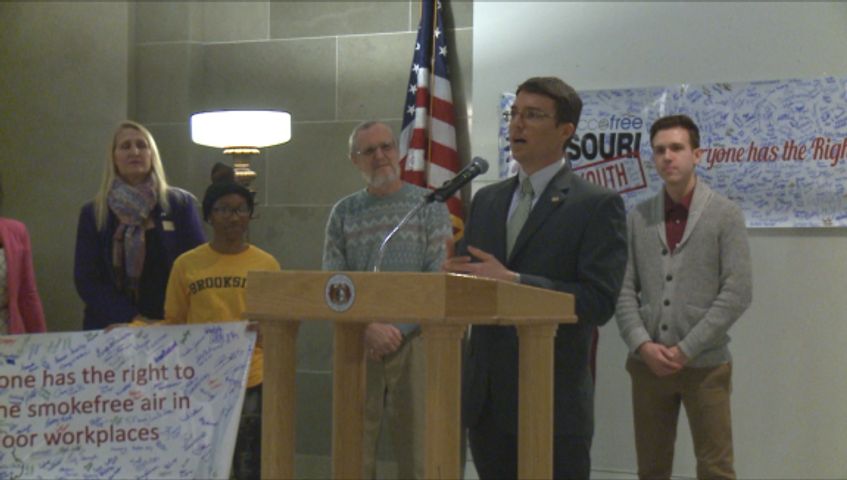 JEFFERSON CITY - Tobacco Free Missouri Youth (TFMY) gathered in the capitol Thursday to raise awareness for its campaign to ban smoking in the capitol.

The chair of Tobacco Free Missouri said there's one part of the capitol affected by smoking.

"It's just private offices, and it's actually just the GOP offices. The minority party, several years ago, they passed a resolution to not allow smoking in their party. It's the GOP that continues to smoke in their offices," Jenna Wintemberg said.

According to TFMY, 7 out of 8 of Missouri's surrounding state capitols are smoke free. The coalition's concern lies with secondhand smoke.

"There's no safe level of exposure to secondhand smoke. Secondhand smoke causes lung cancer, heart disease, stroke, respiratory illness and everybody who comes in the capital is being exposed. Smoke knows no boundaries, it's not going to stay in anyone's office, it's going to make its way out to where the staffers work and to where the visitors are," Wintemberg said.

"Have respect for your body, your health, our laws," Tergin said.

Jefferson City passed a smoke free ordinance in January 2011, and there are 32 other smoke free communities in the state.

"This building belongs to people of the state more so than any other building," Kendrick said.

The rules committee meets during the first week of January, and it has the power to pass a policy creating a smoke free environment. Wintemberg said Tobacco Free Missouri Youth will be in attendance at the meeting.