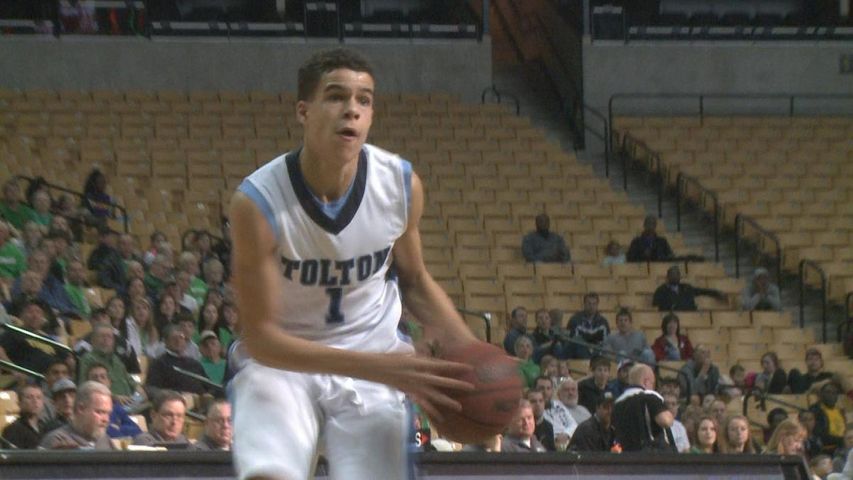 COLUMBIA- Father Tolton Catholic High School freshman Michael Porter, Junior stands tall among his peers at 6'6''. Porter is an asset to Tolton's basketball team as he's leading the team averaging 28.3 points and ten rebounds per game. He's not at Tolton to grab a good-looking stat line, he's there for something that's much more important to him. Porter and his family chose Tolton because of the religion the school works into class and athletics every day.

This school year is Porter's first year in a classroom because he was home schooled through eighth grade. Being around people is nothing out of the ordinary as he was home schooled with not one, not two, but seven brothers and sisters. The Porter family shares a few things: height, basketball, and most importantly, its faith.

Faith is part of what led Porter to go to Tolton, a school that is just in its second year of life.

"It's very faith based," Tolton basketball coach Tyler Clark said. "So it's an attractive place for families that hold that very important and in their family it's very important to them. As evidence by Mike's strong faith, and also that he's a 4.0 student. So, it's been a really good fit for him."

"When the opportunity came for us it was like an answer to prayer, to be honest," Porter's father, Michael Porter said. "Religion should be a part of education, we just think that it knits everything together."

Porter has two older sisters that are seniors at Rock Bridge High School. The two are going to play basketball at Mizzou where their father is the assistant coach. Their mother, Lisa Porter, is Robin Pingeton's sister. Pingeton coaches the Mizzou women's team. Porter explained his two sisters would probably be at Tolton with him if the school existed when they started their high school careers.

"He's got a great resource in his family with his mom playing division one basketball and his dad as well, coaching at Mizzou," Clark said.

Porter said he was attracted to that fact that God is a part of every basketball practice and game.

"Most people think that it was just for basketball that I came here," Porter said. "But, it was actually because not only academically is it better but they also wanted me to like have God involved into school."

"One of the big things that we talk about is bringing God's glory by the way we play the game of basketball," Clark said.

Porter said he owes his skills to his father who taught him how to play at a young age.

"When I was three years old my dad starting training me in the back yard," Porter said. "Every day we would go out into the backyard for an hour or so every night and shoot for a while. After a couple years I knew that it was something I wanted to do for my whole life."

His father also taught him about God.

"He's really been like an ambassador for Christ and spread his word," Porter said. "Like that's my main reason, like I'm just trying to give back to God what he's given me."

Porter's teammates agree what Porter learned from his father is on display every time his feet touch the court.

"He had this reverse dunk or something and the whole team was just amazed by it, the whole crowd was," Tolton basketball junior guard Wes Waterman said.

"He plays basketball, at times like a man and that's very rare at that age," Clark said.

Even though he leads the team in points per game, his teammates said he knows how to help.

"I care way more about the win or the loss than I do about 30 points or 20 points," Porter said.

Porter explained he knows he's not playing for the best high school basketball team in Missouri, but he's okay with it because this summer he's playing on an elite Nike basketball team that travels the country.

"I get the opportunity to play with the best players in the country in the summer so I mean I just have to do what I can for school," Porter said.

"It's a lot different coming to a small school in comparison to a class five school," Porter's mother, Lisa Porter said. "But, the way basketball has evolved now what happens in the summer is really when kids are getting strong looks."

"Some of those tournaments that they plan, every college coach in the country is watching, so they do have great opportunities," Lisa Porter said.

In the end, Porter said it's not about the competition he faces, it's about the person he plays for.

"I'm just playing like to give God glory and play my hardest for him," Porter said.

He plans on letting people in about God.

"First of all just playing my absolute hardest to try to give back to him what he's given back to me talent wise," Porter said. "And, also in opportunities like this where people are interviewing me I can like try to get his word out there."

"When people see you know how he treats his teammates, how they interact, how he is on the floor, I think that can be more impacting than anything else," Porter's father said. "His work ethic when it comes to this over the years, has been astonishing to me. I mean he was a kid that I didn't have to drag to the gym, he was usually asking."

Porter knows it's down the road, but he wants to make it to the top.

"My main goal is to be one of the best players in the NBA that has ever played," Porter said.

"I think the future's bright for him," Porter's father said. "Obviously he's an injury away from all of that being gone, but if he continues the work ethic that he has and yeah I see him taking it as far as he wants to take it."

So, keep an eye out for the freshman as he continues to grow in his faith and basketball.