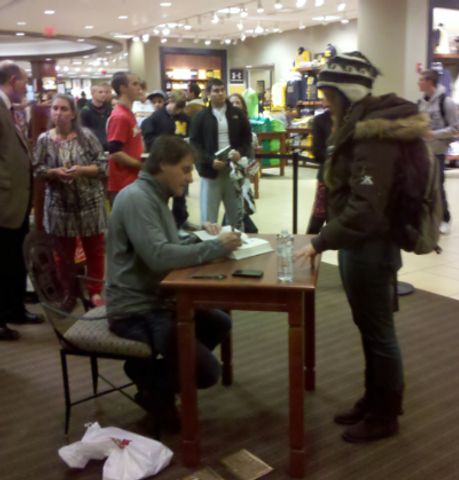 COLUMBIA - Hundreds lined up at the MU Bookstore Tuesday afternoon for their chance to meet baseball legend Tony La Russa.

The former Saint Louis Cardinals manager stopped in Columbia to hold a book signing as he travels across the country promoting his first memoir, "One Last Strike: Fifty Years in Baseball, Ten and a Half Games Back and One Final Championship Season."

The line of fans snaked between tall shelves on the first floor of the bookstore and down the stairs to the ground floor. Some fans waited as long as two and a half hours for their chance at a personalized message from the three time World Series winner.

Many people in line said they expected to give the books as Christmas gifts.

"If you have ever met Tony La Russa he gives the fans all of the credit. He signed my other book too. This one is a gift from my husband to me. He said open it, take it, get it signed. I have been waiting in line since 3 p.m.," said fan Cathy Illingworth.

La Russa began signing books a little after the scheduled start time of 4:30 p.m. The 400 copies of "One Last Strike" the MU Bookstore had in stock sold out by 3 p.m. Several fans in line said Sam's Club, Walmart and Barnes and Noble also sold out of the memoir.

Bookstore spokeswoman Michelle Froese said an event like the La Russa book signing, "shows that Mizzou is a destination place. Of course we do like to sell books too but since our profits stay on campus it's good for the university."

La Russa will hold book signings in Kentucky, Mississippi, Alambama and Tennessee before he wraps up his tour in California December 13th.