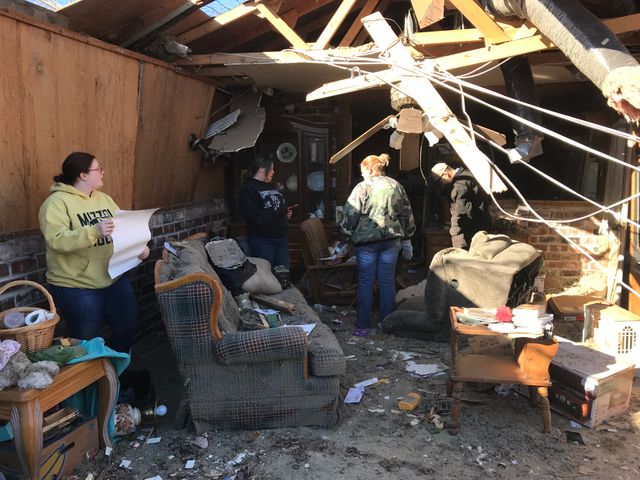 RENICK - An EF-1 tornado ripped through Renick and Higbee leaving destruction in its path.

The storm damaged homes on the south side of Renick along Front Street. One brick building in Higbee was completely destroyed.

The tornado ripped through both towns and then went across Highway 63. The tornado went along Route NN for about four miles.

Jim Charrier is the Emergency Management Director for Randolph County. He said the tornado had maximum wind speeds of 100 miles per hour.

One man was in his home when the tornado ripped through it. Bob Beamer lives on Front Street in Renick. He said he, his son, and two of his granddaughters were in the house when it hit.

"I didn't know how bad it was going to be. It just all hit at one time. Just about 5:30, "Boom" and it was so dark you couldn't see anything really," Beamer said.

Beamer said his granddaughter suffered from a cut on her foot, but everyone else in the house did not have any injuries.

The family dug out Christmas gifts that were salvageable from the rubble.

Diane Lewis is Beamer's stepdaughter. She helped clean up the property after the storm.

"We found some family photos. We're still looking for one that's really important to my parents," Lewis said. "It's overwhelming to try to pick up every little thing."

One woman went to the hospital with fairly severe injuries after her mobile home was hit.

The storm caused serious damage to about six properties and 20 buildings in Randolph County.