Tornado safety is more complicated for those without a basement 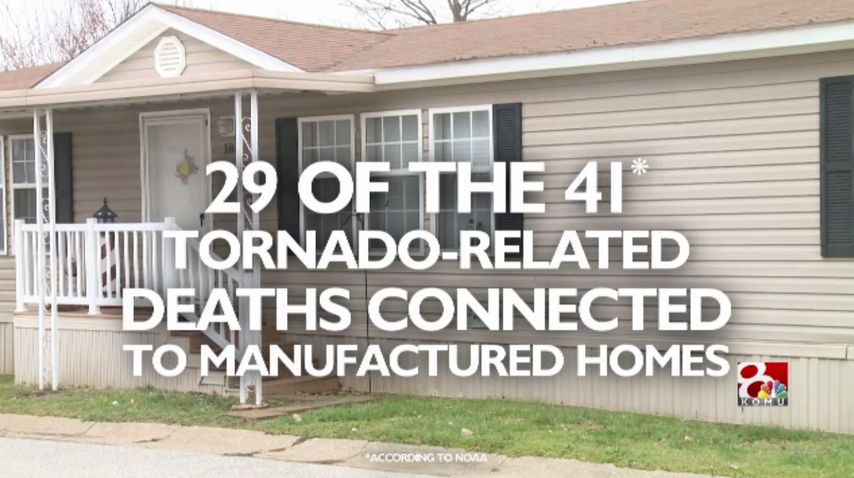 COLUMBIA - If you grew up in Missouri, you’ve been preparing for severe weather your whole life.  From an early age we were taught that when we hear tornado sirens we need to head to the basement.  But what if you don’t have a basement? What if you live in an apartment or a mobile home?

According to NOAA, an average of 40 percent of tornado related deaths are connected to manufactured homes.  In 2019, it was much higher than that with 29 of the 41 tornado related deaths being connected to mobile homes.  That’s 70 percent.  But why are the statistics so high?  Mobile homes aren’t nearly as safe as underground shelters or a solid foundation building, which are the safest places to be during severe weather.

“Several years ago, we came up with the plan to be able to offer a storm location for all the residents. We also had to decide on how to create an awareness for the people. We have a yellow caution light that flashes on the outside so that the residents know that if it flashes, the facility is open and ready for them to come in,“ said Steve Wendling, manager of Richland Heights Mobile Court.

Richland Heights is one of the few mobile home parks in Columbia that has an on-property storm shelter.

He has some words of advice for those living in mobile homes when it comes to severe weather. “Well first thing is don’t panic, but mostly to know where the closest facility is that you can go to. I mean whether it be a school, whether it be a library, or in our case someplace right on site.”

But what if you don’t have a storm shelter?

Sherril Gladney from the Boone County Emergency Management Office says that it’s important to have a designated safe room in your home. Gladney suggests, “You want to be in the most interior room you can be in of whatever structure you are in. So, you want to put the most amount of walls and ceiling between you and the outside as possible.”

Gladney says that there are some particularly safe places you can be if you live in an apartment complex.

But the bottom line is to be prepared and have a plan.

“Being prepared and maintaining awareness and just having a plan,” she says. “It doesn’t have to be a complicated plan just a simple plan and staying aware.”

What about safety measures during COVID-19 shelter-in-place policies? Details here.

Stay up to date with the forecast with the KOMU 8 Weather and Traffic App. Allow push notifications and get exclusive notifications when we're watching for severe possibilities so you're never caught off guard.