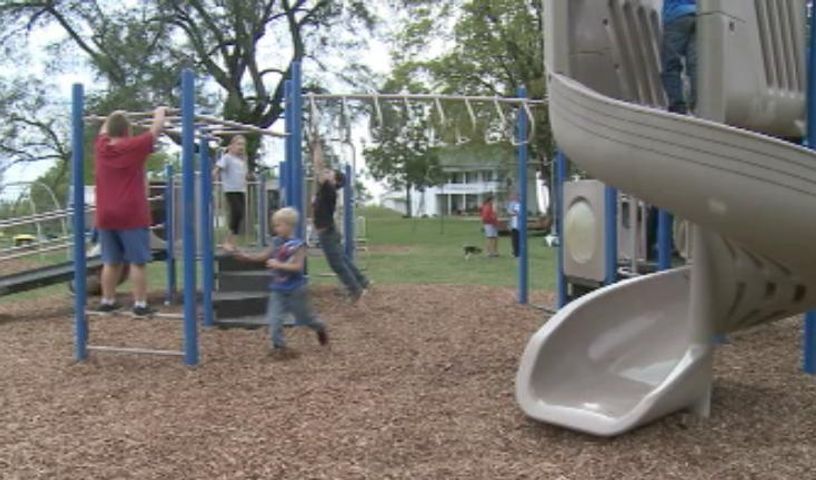 ARMSTRONG - Bob and Dee Cramer moved to Armstrong three years ago and said they immediately saw a need for a place for children to play. However, in a town with less than 300 people, already struggling to pay for a new city hall and community center, funding for a park project doesn't come easily...or at all.

"This equipment that we have, best we can figure up, is [worth] over $80,000," Cramer said, "For a little place like this to come up with that kind of money, it's out of the question."

The Cramer's recieved the playground equipment for free from a closed school in Kansas City. The process of contacting the school, hauling the equipment from Kansas City and setting it up in Armstrong has taken nearly three years. Cramer said they completed the project with only the help of volunteers and donations.

The city of Armstrong has also spent the past three years gathering enough funding and loans for a new City Hall and Community Center. Cramer said there just wasn't enough money to go toward both projects.

"The mayor was sitting in our living room and asked me 'why are you doing this?' and I said 'because I live here and he said 'well I live here too and I wouldn't be doing this," Cramer said.

However, a new park wasn't the only thing that came out of this project, but also a stronger community.

As the equipment started coming in, so did the help. Members of the community donated their time and labor. Local companies provided piping to help secure the equipment and mulch to put around the playground. Local children helped work on the park after school. Cramer said no one did it for recognition, but for the future of Armstrong.

"The was Bob and Dee's dream but the community just came in around them and volunteered all ths wonderful help," Armstrong City Council Member Willie Stroupe said.

Cramer said the new park is to keep the town of Armstrong alive for future generations.

"If you don't do something for the kids, then people like me ought to turn out the lights because you're not going to have the city long," Cramer said, "It's not ours, it's theirs' and they're over here taking care of it and playing on it. And it's making a big difference."