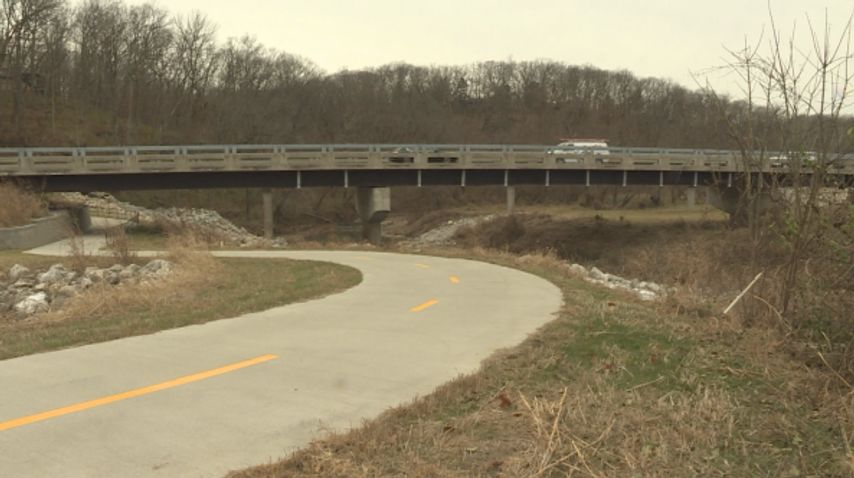 COLUMBIA — If weather permits, there will be lane restrictions on part of Forum Boulevard beginning Thursday, December 15.

The lane restriction will affect the south lane of Forum, near the Hinkson Creek Bridge, across from Wilson's Fitness. One lane will be closed for about a week to allow for installation of a trail connector.

The project to construct a pedestrian walkway over Hinkson Creek began in March, 2016 and was recently completed. The bridge and trail connector is intended to provide a safer path and more access to the MKT trail, as well as the stores across from the bridge.

Ted Curtis is the Bike and Pedestrian Coordinator for the City of Columbia. He works as a connection between Columbia's Public Works and Parks and Recreation departments.

According to Curtis, the trail connector is the last piece of the project needed to be complete.

"There has been some requests from the bike community to have a connection on the other side of the road on the south side, so we're going to put in a short connection to get onto the shoulder on the opposite side," Curtis said.

Curtis also said the project is really about safety and preference for cyclists and pedestrians using the bridge and trail connector.

"It's been a good project. A lot of people like it, a lot of people use the bridge. So, this will connect right to the bridge on that side of the road," Curtis said. "From a bike standpoint, you want to go with traffic, so it allows you to stay on the shoulder and not have to go across the hill, so you can continue on the same side you should be on."

The road work will be relatively quick and won't cause too many traffic issues.

"The whole project is a couple of days. But the actual closure will only be when trucks are there, so the closure of one lane of Forum only, right by Wilson's there, will be pretty limited," Curtis said.

Curtis, along with Columbia Public Works, is urging drivers and anyone else using the bridge to be very cautious while the work is taking place and to use an alternate route if possible.

"Like any other project, there will be flagmen out there and cones. Most people in Columbia know it's a temporary thing and to watch out for people," Curtis said.

If construction work goes according to plan, it is expected to be finished by December 22.